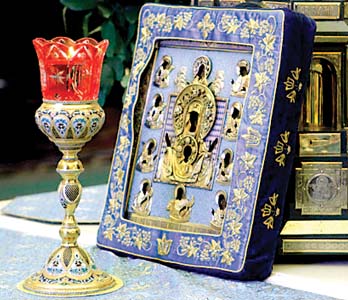 On Wednesday, September 21, 2016, the feast day of the Nativity of the Most-Holy Mother of God, His Eminence Metropolitan Hilarion of Eastern America and New York, First Hierarch of the Russian Orthodox Church Outside of Russia, celebrated Divine Liturgy, having served all-night vigil the evening before, at the Synodal Cathedral of Our Lady “of the Sign” in New York City. He was joined by His Grace Bishop Nicholas of Manhattan, Deputy Secretary of the Synod of Bishops, along with the cathedral’s clergymen.

After Liturgy, His Eminence addressed Bishop Nicholas and the delegation he is leading to accompany the Kursk Root Icon of the Mother of God “of the Sign,” the main holy icon of the Russian diaspora, on a pilgrimage to Russia, wishing them God’s protection.

The Kursk Icon will be brought to the territory of the Russian Orthodox Church, where it will be made available for veneration to worshipers in a series of churches and monasteries of the Kursk Diocese and the Mordovia Metropoliate. The delegation will return to New York on October 10.