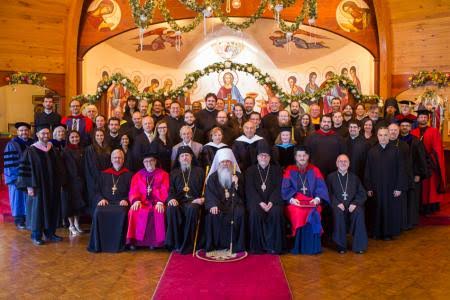 “Seminary means ‘a place where the seed is sown,’” he reminded the graduates, “but for a seed to bear fruit, the soil has to be turned over, raked, sifted, watered, and weeded. You’ve been working really hard, but in the midst of doing that, you’ve been worked over, stretched, pushed, and extended in ways that seemed to you to be incomprehensible.

“Yet all of that has made you more merciful, resilient, and loving, so that the seed that’s been planted here can bear fruit,” he explained.

In other remarks, Father John honored the memory of Dean Emeritus Protopresbyter Thomas Hopko (+March 18, 2015), observing his incalculable impact on hundreds of alumni. He also recalled the invaluable, lasting contributions of two former Trustees, Attorneys Lyon J. Lysaght, Jr., and Eric S. Namee, to their respective Board Committees—Statutes and Academic Oversight, and Interchurch Relations and Legal Affairs—as he welcomed them into the ranks of “Trustees Emeriti.” He further congratulated faculty member Dr. Peter C. Bouteneff on his promotion to the rank of full Professor, and thanked him for his “outstanding work and service to this institution.”

The highlight of the ceremony was the Commencement Address by His Eminence, Metropolitan Elia of Oulu, Finland, a Saint Vladimir’s alumnus (M.Div., ’03). He recalled his own days as a student and then addressed the graduates, saying, “You have spent time learning about the great gift that has been given to you: no less than Christ crucified, risen, and manifest in His Church.

“Hundreds of generations in the Church have come before you… and you are part of this community, seen and unseen, inspired by God Himself.  I hope this realization will always bring you peace and comfort,” he continued.  “God will never ask of you more than you can bear, but often He will ask no less.”

Over a decade ago, His Eminence had missed his own Commencement ceremony due to the death of his mother, whose funeral had coincided with the day of his graduation. In a touching presentation, Alumni Association Board Chair Gregory Abdalah gave Metropolitan Elia the customary gift for Saint Vladimir’s Seminary graduates: a cherry wooden frame for his diploma.

Other ceremonial high points included the Valedictory Address by Luke Perry Bullock and the Salutatory Address by William Rettig. As well, this year’s Saint Macrina Award for Excellence in Teaching—an honor bestowed by the student body—was presented to Dr. George Parsenios, Professor of New Testament, by Student Council President, Priest Theodor Svane. Father Theodor attributed the award to Dr. Parsenios’s “engaging teaching style, and his willingness always to go deeper into any subject,” as well as “his apparent Orthodox faith, shining through his lectures.”

As President of the seminary, His Beatitude, Metropolitan Tikhon, opened and closed the ceremonies. He congratulated the graduates and exhorted them “to seek the Lord in silence so that [they] might share that gift with a thirsty world.” He further commended the spouses of seminarians, calling them “hesychasts” and comparing their efforts to self-martyrdom which, he said, “you have borne and will continue to bear.”

Other honored guests at the Commencement were the Very Reverend Dr. Mardiros Chevian, Dean of Saint Nersess Armenian Seminary, and His Eminence, Archbishop Melchisedek of Pittsburgh and Western Pennsylvania.

A photo gallery by Leanne Parrott Photography and audio recordings of the Commencement addresses may be accessed here.

Commencement exercises also were held in late May at Saint Tikhon’s Seminary, South Canaan, PA and Saint Herman’s Seminary, Kodiak, AK.  Information and photos will be posted on the OCA web site as they are received.