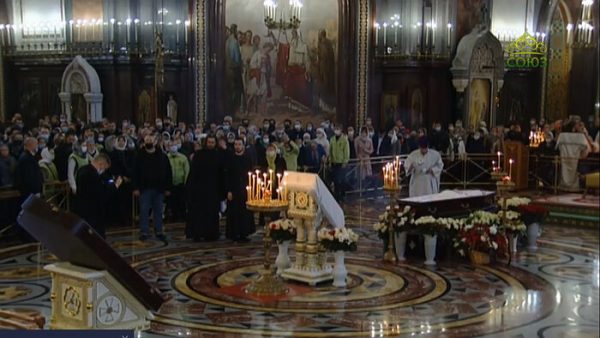 Numerous hierarchs and clerics and thousands of faithful of the Russian Orthodox Church gathered in Moscow’s Christ the Savior Cathedral to bid farewell to the newly-departed Archpriest Dimitry Smirnov this morning.

Fr. Dimitry reposed in the Lord on Wednesday at the age of 69, having suffered from several illnesses. He was a champion of the pro-life and pro-family movement and a powerful preacher who converted thousands.

The hierarchical Divine Liturgy and funeral service were led by His Eminence Metropolitan Dionysiy of Voskresensk, the Chancellor of the Moscow Patriarchate. His Holiness Patriarch Kirill earlier expressed his regret that he could not personally attend the funeral due to being in quarantine.

The service was livestreamed on the cathedral website by the Orthodox TV station Soyuz:

With the blessing of the Patriarch, Fr. Dimitry will be buried behind the altar at the Annunciation Church in Petrovsky Park in northwestern Moscow, where he served as rector.