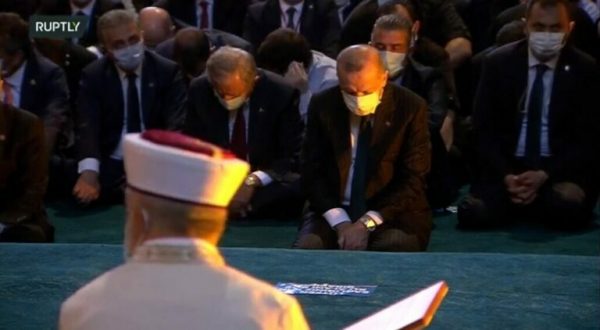 Up to 3,000 people became infected with the coronavirus infection after praying together at Hagia Sophia, reports the Orthodox Times.

Among them are four confirmed members of Erdogan’s AK Party, at a time when COVID-19 is once again spiralling in Turkey, which is facing the second wave of the pandemic.

Sarp Üner, a professor from the department of public health in Turkey, made the calculation of the cases of Hagia Sophia, as reported by The Times. The outbreak was expected, according to Turkish epidemiologists, as 350,000 people gathered in the area around Hagia Sophia for the first prayer on Friday, July 24.

Of these, 500 official guests were found inside the church, who had been placed at safe distances from each other, however, four government officials, who were near Tayyip Erdogan, were infected.

In a small perimeter outside the Hagia Sophia, social distancing was also observed between the faithful, but the same did not happen, a few meters away from the camera, after the police bars, where hundreds of thousands of people flocked together.

Professor Sarp Üner added that many of the Turks who were in Constantinople for prayers traveled to the eastern country in early August, many of whom transmitted the virus. “I believe that the mass gathering in Hagia Sophia will increase the number of cases in Constantinople. It is certain that very difficult days await us,” the professor told a Turkish news agency.