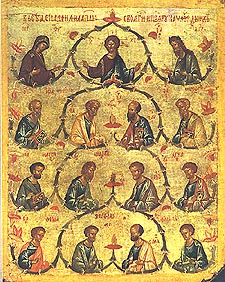 On this day, illumined by the reflected glory of the first two Leaders of the Apostles of the Lord, who form a new choir of shining stars in the spiritual firmament. Foundations and pillars of the Church, they are also the angels who guard the Twelve Gates giving access to the heavenly Jerusalem.

The earliest of the People of Israel, the sons of Jacob were twelve in number, and the Lord also chose Twelve Disciples, whom He made witnesses of His teaching and miracles, whom He sent to preach the Kingdom of God, and on whom He conferred the power to cast out demons and to heal every infirmity. After the Resurrection, He sent them throughout the world to proclaim the Gospel to the whole creation and to baptize all peoples in the Name of the Father and of the Son and of the Holy Spirit.

Just as the Son had been sent by the Father into the world for our salvation, so choosing His Disciples and gathering them together, He sent them to proclaim that the Kingdom of Heaven was very near: As the Father has sent Me, so I send you. As the condition for becoming His Apostles, He asked them to renounce all earthly attachments: “Provide neither gold nor silver, nor brass in your purses, nor scrip for your journey, nor two coats, neither shoes nor yet staves. He also warned them would undergo tribulations and persecutions in bearing witness to Him: “Behold, I sent you forth as sheep in the midst of wolves…You will be hated by all on account of Me…You will bear witness before governors and kings for my sake, to bear witness to Me. But when they deliver you, take no thought how or what ye shall speak or what you are to say; for it shall be given you in that same hour what ye shall speak, for it is not ye that speaks, but the Spirit of your Father which speaketh in you.”

Witnesses to the Resurrection of the Lord both by their lives and their preaching, the holy Apostles offered themselves as a spectacle before the world, before angels and before the human race, saying with Saint Paul, “We have become a spectacle unto the world, ill-treated, homeless, naked, we both hunger and thirst and endure harassments of every kind, rejected by all, so that by their sacrifice the Church might be built on the power of God and not on human strength.

Today, the holy and Illustrious Apostles form a harmonious choir around the first two holy Apostles:

Andrew, the First-Called, brother of Peter, who proclaimed the Gospel in the coastal regions of Bithynia, Pontus, and Armenia. Returning by way of Pontus and Byzantium, he traveled as far as Greece, where he was crucified at the city of Patras in Achaia (Peloponnessos).

James, the son of Zebedee, who witnessed for the Resurrection throughout the whole of Judaea. He perished by the sword on the orders of King Herod Agrippa, who was jealous of his renown.

John the Theologian, the brother of James, who rested on the Lord’s breast. After having proclaimed Christ in the province of Asia, he was exiled to the Greek island of Patmos on the orders of the pagan emperor Domitian, where he wrote the Gospel and the Apocalypse (Revelation). He finally returned to Ephesus where he fell asleep in peace at a great age.

Phillip, who came from Bethsaida in Galilee like Peter and Andrew. He proclaimed the Good News in the province of Asia and in the region of Hierapolis in Phrygia, in the company of his sister Marianne and of Saint Bartholomew. He died in Hierapolis, being crucified by the pagans.

Thomas, also called Didymus, who spread the Gospel among the Parthians, Medes, and Persians, and the inhabitants of India. He was pierced to death by pagan lances.

Bartholomew preached in Lydia and in Mysia along with the Apostle Phillip. After the death of the latter, he continued his mission in Arabia, in Persia and in India, and finished his course in Armenia, where he was crucified in Albanopolis. His body was placed in a lead box and thrown into the sea, but was later recovered in Sicily.

Matthew, the Publican, formerly called Levi, was the brother of James the son of Alphaeus. After having written his Gospel, he left on a mission to the Parthenians. It is said that he was burned alive in Hierapolis on the banks of the Euphrates.

James the son of Alphaeus proclaimed Christ in Gaza and in and around Eleutheriopolis. He was crucified in the town of Ostracine in Egypt.

Simon the Zealot, from Canna in Galilee, who is also called Nathanael in the Gospel of John, proclaimed the Good News in Mauritania in North Africa; it is said that he then left for, Great Britain, where he was crucified.

Jude, a kinsman of the Lord, also called Thaddeus and Levi by Saint Matthew, departed on a mission to Mesopotamia, and finished his days in the regions near Mount Ararat, where he was hanged and pierced with arrows by pagans.

Matthias was added to the number of the holy Apostles after the Ascension, to replace Judas Iscariot, the traitor. He preached the Gospel in Ethiopia, where he gave his soul into God’s hand after suffering numerous tortures at the hands of the pagans.

It is the tradition to associate the holy Evangelists with these blessed Apostles: Mark, a spiritual son of Saint Peter, who evangelized Alexandria and the Pentapolis, and who suffered martyrdom by being crushed under the weight of a rock; Luke, the physician and first iconographer who, after having accompanied Saint Paul on his journeys, wrote his Gospel under the Apostle’s influence. Finally settling in Thebes in Voetia, he died there in peace at the age of eighty-four.

It is on the testimony of these Holy Apostles, whose sound is gone out into all lands in order to proclaim the reality of Christ’s Resurrection, that the Church has been built. If they occupy the first place in the assembly of the Saints, it is precisely because detaching themselves from everything else in order to follow the Lord, they became His perfect imitators and proclaimed to all: “Be ye followers of us, just as we are of Him.”

Once the generation of those who had known the Lord during His earthly life had passed, the Apostolic Ministry did not end, but, as Saint Paul testifies, was transmitted to all those who have beheld the Resurrection of Christ through the illumination of the Holy Spirit. The grace of the Apostolic charisma (gift) is not limited to the Oral proclamation of the Good News but is shared by all the Saints, who have contributed to the building up of the Church through their witness to the Resurrection. (Source: The Synaxarion ‘The Lives of the Saints of the Orthodox Church’)