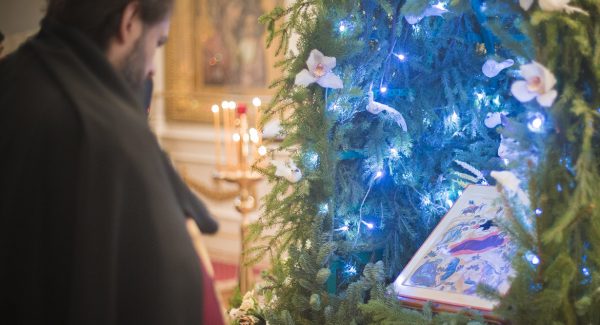 I would like to tell you a true story about a Christmas eve in 1944. One of the last German offenses near the end of WWII took place in the Ardennes forest near Belgium during what has become known as the Battle of the Bulge. It was winter, snowing and bitterly cold. Many soldiers on both sides suffered from frostbite, hunger and many hardships due to lack of supplies and the extreme weather. Not far from where the battle was raging was a little hunter’s cabin where a German family lived. The father was serving in the military and was absent. In the cabin were the mother and her twelve year old son. Food was scarce. They had one rooster and some potatoes which the mother was saving for when her husband would return and be reunited with his family. There was a knock at the door. It was war time and you could imagine the mother’s fright. Summoning her courage she answered the door. Three American soldiers greeted her, one of them badly wounded. They had been separated from their battalion and were lost, wandering in the freezing cold forest for three days and hiding from the Germans. The woman had a strong Christian faith. It was Christmas eve, and in her eyes she saw three young men who were tired, frostbitten, starving and in need of help. She invited them in to take shelter. When they removed their outer garments, she no longer saw enemy soldiers. In her eyes these three young men were mere boys, and that’s how she treated them. She proceeded to cook the potatoes and rooster that she was saving for her husband’s return. She had the wounded soldier lay down on her son’s bed.

There was a second knock at the door. This time when she answered, there were three German soldiers standing before her. Like the American soldiers, they looked exhausted, disheveled and suffering from the cold. She was paralyzed with fear, knowing that she could be accused of treason for harboring the enemy and she and everyone else in her cabin could be shot! The Germans had also become separated from their regiment and asked if they could take shelter with her for the night. Summoning her faith and courage, the woman explained that there were three American soldiers in the cabin who had also lost their way, one of them a boy with a gunshot wound fighting for his life. She said that this was Christmas eve and there will be no shooting here tonight. “Any one of you could be my son,” she explained. “All of you are tired and exhausted. Tonight we will forget about killing and we will all eat and rest and celebrate Christmas together.” The Germans stacked their firearms by the door, and the Americans were asked to do likewise. At first it was awkward with the Germans and Americans sitting together in the cabin. Then one of the Germans who had some medical training tended to the wounded American soldier. “He’s lost a lot of blood, but he will be alright. He just needs some rest and nourishment.” When they sat down to dinner, the woman had tears in her eyes as she said the prayer before the meal, saying in German “Come Lord Jesus.” Everyone else had tears in their eyes as well. Just before midnight the mother invited everyone to come outside and see the star of Bethlehem in the sky. For all of them during the moment of silence, looking at the brightest star in the heavens, the war was a distant, almost-forgotten thing. For that one night, the war was over for these six young men, a woman and her child. Like a family, with love, kindness, peace and joy, they broke bread together and celebrated the birth of our Lord Jesus Christ. The next morning the Germans showed the Americans on a map how they could find their battalion. They all shook hands and then went their separate ways.

We are also like soldiers who are in the midst of a battle and waging warfare, but our war is spiritual, and our enemy are the dark and evil spirits which try to lure us away from God. Today on this holy and great feast and every day we should flee anger and instead practice love and kindness. Tonight and every night we should forget our differences and remember that we are all brothers and sisters. We all have the same Father in heaven. Instead of holding grudges and judging each other, we should instead be kind to each other like those six soldiers, a mother and her child on that Christmas eve in the Ardennes forest seventy seven years ago. Today many of us are invited to spend Christmas with family and loved ones. One invitation we are not required to accept is the invitation to participate in arguments. When someone invites us to participate in an argument, we should refuse that invitation and walk away. You will never change someone’s mind by arguing with them. What changes people is not anger but love. Discussions should be conducted calmly and peacefully with mutual respect and kindness. It means listening with an open mind to the other person’s point of view. We always think that we are right when the fact is that the other person thinks the same thing. Have we considered that perhaps sometimes we might be mistaken and wrong? When the passions begin to flare up and mutual respect withers, then it is time to walk away before a discussion turns into a shouting match and we are tempted to resort to insults and name calling. Is that how differences of opinions should be settled, by who can shout the loudest and who can come up with the most hurtful insults? I’ll repeat what I said: one invitation we are not required to accept is the invitation to participate in an argument. On this sacred and holy day when we celebrate the great feast of the Nativity of our Lord, God and Savior Jesus Christ, may we honor the Lord by showing mutual love, kindness and respect to each other. May we all enjoy a blessed and joyous feast of the Lord’s Nativity! Amen. 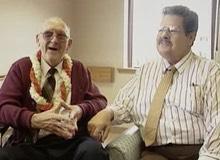 Ralph Blank (one of the American soldiers) and Fritz Vincken (the 12 year old German boy) reunited in January, 1996.