Today We Celebrate the Conception of Our Most Holy Theotokos by St. Anna 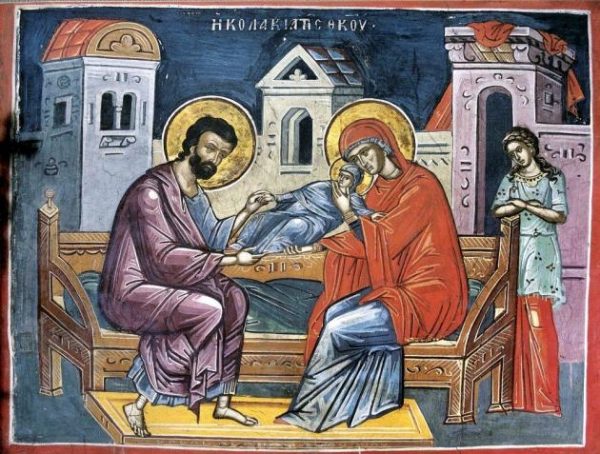 St. Anna, the mother of the Virgin Mary, was the youngest daughter of the priest Nathan from Bethlehem, descended from the tribe of Levi. She married St. Joachim, who was a native of Galilee. St. Anna was childless, but after twenty years, through the fervent prayer of both spouses, an angel of the Lord announced to them that they would be the parents of a daughter Who would bring blessings to the whole human race.

The Orthodox Church does not accept the teaching that the Mother of God was exempted from the consequences of ancestral sin (death, corruption, sin, etc.) at the moment of her conception by virtue of the future merits of Her Son. Only Christ was born perfectly holy and sinless. The Holy Virgin was like everyone else in Her mortality, and in being subject to temptation, although She committed no personal sins. She was not a deified creature removed from the rest of humanity. If this were the case, She would not have been truly human, and the nature that Christ took from Her would not have been truly human either. If Christ does not truly share our human nature, then the possibility of our salvation is in doubt.

The Conception of the Virgin Mary by St. Anna took place at Jerusalem. The many icons depicting the Conception by St. Anna show the Most Holy Theotokos trampling the serpent underfoot. There are also icons in which St. Anna holds the Most Holy Virgin on her left arm as an infant. On St Anna’s face is a look of reverence. A large ancient icon, painted on canvas, is located in Russia. From ancient times this Feast was especially venerated by pregnant women.

Today the bonds of barrenness are broken,
God has heard the prayers of Joachim and Anna.
He has promised them beyond all their hopes,
To bear the Maiden of God
By whom the Uncircumscribed One was born as mortal man,
Who commanded an angel to cry to Her:
Rejoice, O Full of Grace, the Lord is with You!
Troparion + Tone 4

Today the universe rejoices,
For Anna has conceived the Theotokos through God’s dispensation,
For she has brought forth the One who is to bear the Ineffable Word!
Kontakion +Tone 4

Most viewed articles
The Trap of Religiosity86
Faith and Moral Freedom82
Patriarch Kirill: “The Memory of the New Martyrs will Help Us to Be Faithful to Christ amid Modern Temptations”81
Bishop Nicholas of Manhattan visits Holy Cross Monastery in West Virginia78
Lord, Save Me!66
Patronal Feast Celebrated in St. Anna Convent in Vashkivtsi43
Condolences of Patriarch Kirill over the death of believers in the fire that broke out in Abu-Seifein Church in Cairo38
25 Years of Help: the Ship-Church Goes On its 25th Voyage to Distant Villages27
St. Tikhon Church to host Liturgical Music Symposium in October 202226
Most popular authors
Pravmir.com team293
Vasileios Stoyiannos86
Archpriest Michael Gillis82
Fr. Theodore Stylianopoulos66