Source: OCA
Natalya Mihailova | 21 August 2015
For two weeks, Archpriest Michael Boyle and the faithful of Saint Michael the Archangel Cathedral here have been praying for relief from the torrential rains that have pounded the region and flooded the historic structure’s basement. 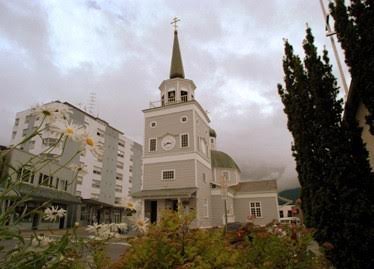 “While the cathedral, which stands in the middle of the downtown district, has been spared from mudslides, it has been significantly affected by rain—especially over the past 48 hours during which at times up to an inch an hour fell,” said Father Michael on Wednesday, August 19, 2015.  “For the hearty Sitka faithful, who live in the Tongass National Rain Forest, being wet is not just a part of life—it is life!

“We are thankful to God that none of the icons or artifacts that belonged to Saint Innocent, nor any other sacred items, have been damaged or affected by the water,” Father Michael added.  “However, the cathedral’s main dome began to leak, so buckets and tarps now cover the floor.” 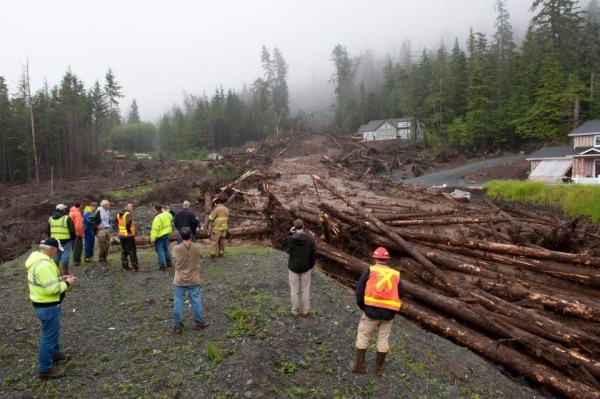 Sitka was placed on a State of Alaska emergency alert as Governor Bill Walker visited the city to examine the devastation this week.

“We have had three major mudslides, one of which totally engulfed and buried a brand new house under tons of dirt and Sitka spruce trees,” Father Michael reported.  “The house has not been found, and rescuers have neither heard from nor located the three painters who were inside the house at the time of the slide.  Our faithful and the 9,000 inhabitants of our little town are in shock as the three workers are friends to a number of our parishioners and many of the town’s residents.”

While other families have been evacuated from their homes as a precaution against ongoing slides, the cathedral faithful’s main concern remains additional flooding.

“Over the past two weeks the cathedral basement has been closed off, and it’s been a challenge to keep the basement dry, free of water and most recently, free from the growth of mold,” said Father Michael.  “With the severe storm raging these past two days, the basement has been hit hard with major water damage.  Yesterday we pumped out 1,100 gallons of water, and we still have about 500 gallons still waiting to be removed.  Our sump pumps are working, but our dilemma is the configuration of what we have come to call ‘the perfect storm.’

“Elements of this perfect storm,” according to Father Michael, “include the cathedral’s close proximity to the water table, combined with the torrential rains and the regularity of two high tides a day.  All of this equals massive amounts of water in need of some place to go—and that’s our basement.  While we will weather this storm, as we have many others, we now face the larger issue of sustainability.”

His Grace, Bishop David of Sitka and Alaska, who is well aware of these most recent incidents and the cathedral’s needs, has called for an assessment of possible anomalies in the cathedral’s original structure that could be adding to its current problems.  Constructed of spruce logs by skilled Finnish carpenters between 1844 and 1848, the landmark cathedral was designed by Saint Innocent, who also fabricated the clock that graced its bell tower.  The present cathedral is a faithful reconstruction of the original building that burned to the ground on January 2, 1966.  At the time, over 95% of the original icons and liturgical items—irreplaceable examples of 18th and 19th century Russian religious artwork, including the Sitka Icon of the Mother of God—were salvaged by 100 local residents who formed a human “chain” to rescue the burning cathedral’s contents.

“We remain assured of God’s help for us and His loving mercy for those who have lost their lives and their families and for those who have been displaced,” said a hopeful Father Michael.  “We are blessed to live in a little town in which, when something like this happens, everyone pitches in to help their neighbors.  We ask for everyone’s prayers, and we thank one and all for the support we have already received.”