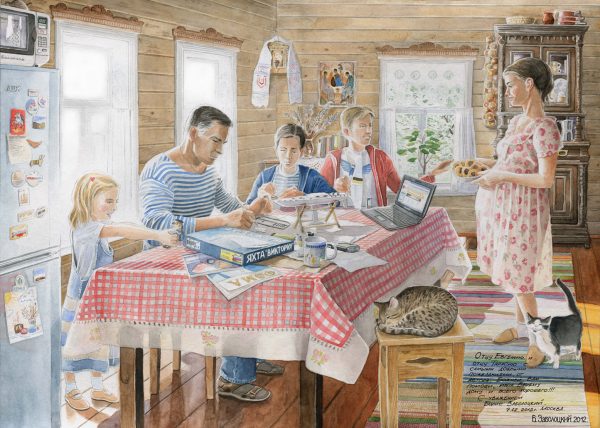 What are “traditional family values” and what is their role in the life of a Christian?

First of all, it is important to understand what is not meant by the term “traditional family values”.  In particular, the term does not mean that the family is the most important thing in life, or that one should put the family first before everything else.  Members of the Mafia might perhaps think so, as the Corleone family squares off against the rival Tattaglia family or the Barzinis.  But Christians cannot grant the family first place in a list of priorities, for we follow One who said, “I have come to set a man against his father, and a daughter against her mother, and a man’s foes will be those of his own household.  He who loves father or mother more than Me is not worthy of Me; and he who loves son or daughter more than Me is not worthy of Me” (Mathew 10:35-37).  We are called to love and respect our fathers and mothers and cherish our children, but our first and fundamental loyalty belongs to Christ.

The term “traditional family values” in fact functions as code for the rejection of the rival values and ideologies being aggressively pushed and promoted here in the secularized West.  That is perhaps why the liberal left is somewhat shy about discussing it or using the term.

Consider, for example, a (now old) article in a 2013 edition of the Atlantic, entitled, “Why Is It Hard for Liberals to Talk About ‘Family Values’?”  The author of the article, Emma Green, asked, “Are ‘family values’ a taboo topic for the left?  For one thing, there may be a language problem. ‘Family values terminology is so closely connected to the 1980s and Jerry Falwell-esque way of framing it – it’s an immediate turn-off,’ said Brad Wilcox, the Director of the National Marriage Project at the University of Virginia…For those who lean to the left, the phrase ‘family values’ tends to bring back uncomfortable memories of the Reagan era and the ‘Moral Majority’.”

The term “traditional family values” is therefore not ultimately about the importance of family; it is a verbal shot fired across the bow of an enemy ship in a cultural war.  Those using the term are expressing their rejection of and opposition to a cluster of comparatively recent cultural phenomena, such as the aggressively pursued legitimation of homosexual behaviour and homosexual marriage, the acceptance of transgenderism with the accompanying declaration that gender can be chosen at will and is unrelated to basic biology, and the ubiquity and normalization of pornography.  Other things unrelated to sexuality can be added to the list.  What they all have in common is that they all form part of a coherent and systematic rejection of the moral universe that was in place decades ago and is now under threat.

One thing is certain:  the values found on the traditional family values list are indeed traditional.  That is, they can truly claim to have their roots in the Christian faith (and in other faith traditions as well) from ancient days until fairly recently.  That does not, of course, in itself prove that the new practices are wrong, but it does mean that in promoting the new secular values and ideology one must make the case that Christianity (and Judaism and Islam) have been dramatically wrong for hundreds or thousands of years, and that the modern promoters of the moral novelties are somehow wiser than all who came before them.   That is quite a task, and perhaps accounts for the liberal left’s preference for name-calling over sustained argument.  It is easier to simply label the traditionalists as neanderthal bigots on the wrong side of history than to actually argue one’s secular case.

What then is the place of traditional family values in the life of a Christian?  I suggest two things, relating to the Christian’s role in the public square, and in his internal family.

Regarding the public square, I suggest that it is facile and naïve to assert that the embrace of what is effectively a new morality will not impact society negatively in the long run.   This being so, a Christian should do his or her best to oppose the promotion of the new morality.  This does not mean that if the marriage of homosexuals becomes legal on Monday the families of heterosexual partners will collapse by a week Friday.  To those who ask rhetorically, “Have you ever known anyone whose marriage broke up because of Gay Pride parades?”, the answer is, of course, “No”.  But we are discussing a long-term cultural trajectories, not immediate results.

It is arguable, for example, that men and women being different, fathers and mothers have different and complementary roles in the formation and raising of children.  The deliberate alteration of the traditional model so that one has two daddies or two mommies therefore deprives the children of needed input from the opposite partner, as well as separating sexuality from procreation.  Furthermore, it privileges personal choice in ways that cannot always be foreseen.

For example, in Canada we now insist that individuals have the right to choose when and how they will die, with so-called Medical Assistance in Dying (i.e. doctors killing people upon request).  As this becomes more and more common, it puts pressure on the elderly to end it all prematurely, lest they become financially burdensome to their children.  This result was not foreseen, and certainly not intended, but it is coming to pass nonetheless.  In the same way, making personal choice paramount (whether in choice of sexual partner or choice of gender) will have unforeseen long-term results in future generations.  The new untraditional values are laying a foundation for the future of a society which may be dramatically different from the one we now have, and a Christian should oppose developments which will harm future generations out of concern for the society in which he lives.

Each family must decide for themselves how they will live and raise their children.

This means that as society increasingly rejects traditional family values, Christian families must become increasingly counter-cultural.  Even if we despair of changing current mores and abandon the public square, we still have to live by values that reflect our faith.  This is hardly new.  We have been in the cultural catacombs before, and we may be headed there again.

Ultimately it is not about family values, but about faithfulness to Christ.  Christ commands His disciples to live a certain way, regardless of whether or not people around them live that way.  There may come a time when we cease to talk about traditional family values and simply talk about the way of life Christ has given us.  If society continues in its downward spiral, that day might not be too far away.