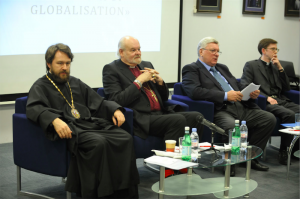 An international symposium on the Traditional Values in an Age of Globalization organized by the Embassy of the Russian Federation in the United Kingdom of Great Britain and Northern Ireland, the Moscow Patriarchate’s Department for External Church Relations and the Diocese of London of the Church of England, was held at the ‘Rossotrudnichestvo’ office in London on February 21, 2014.

H.E. Alexander Yakovenko, Ambassador Extraordinary and Plenipotentiary of Russia to Great Britain addressed the participants with an introductory speech.

Metropolitan Hilarion of Volokolamsk, chairman of the Moscow Patriarchate’s Department for External Church Relations, presented a report on the “Christian Values in an Age of Globalization.”

Speaking on behalf of the Church of England were the Revd Professor Ben Quash, the Revd Dr James Walters and the Rt Hon and the Revd Lord Green of Hurstpierpoint.

Other panelists included Professor Anatoly Torkunov, rector of the MGIMO-University, and professor Alexander Agadjanian of the Russian State University for the Humanities, who commented on the statements made by Archbishop Rowan Williams of Canterbury and Patriarch Kirill of Moscow and All Russia on the topic ‘Religion and the Secular World.’

That same day, Ambassador Yakovenko gave a dinner in honour of the participants in the symposium at his residence.