Source: Eastern Christian Insights
Priest Philip LeMasters | 08 May 2022
Homily for the Sunday of the Myrrh-Bearing Women in the Orthodox Church, Mark 15: 43-16:8. 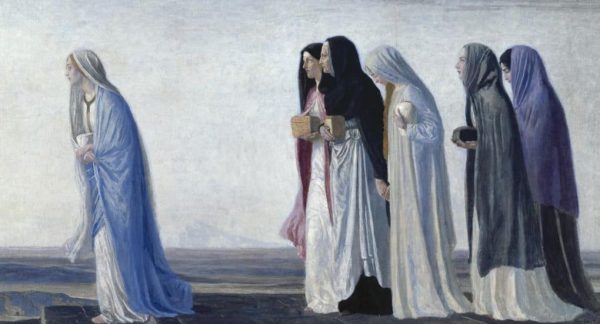 It is easy to assume that we have strong faith when it seems like everything is going our way.  All too often, that means that we have come to trust in ourselves for following a religion that we imagine will give us what we want.  When difficult struggles come, however, the truth about our weak souls is revealed.  Then we come to see that real faith in God is not about serving or congratulating ourselves, but something entirely different.

Today we commemorate those whose dedication to Christ shone brightly in the midst of their sorrow and despair. With broken hearts and in terrible shock and grief, the Theotokos, Mary Magdalen, two other Mary’s, Johanna, Salome, Martha, Susanna, and others whose names we do not know went early in the morning to the Lord’s tomb in order to anoint Him properly for burial.  They had seen Him die a terrible death and expected to find His body lying in the grave.  By doing what they could to show one last act of devotion to the Savior, the Myrrh-Bearing Women received the astounding blessing of being the first to hear from the angel the good news of His resurrection.

Along with them, we also remember today Joseph of Arimathaea, who bravely asked Pilate for the dead body of the Lord and took Him down from the Cross with his own hands.  Nicodemus, the Pharisee who had previously not understood Christ at all, helped Joseph bury Him.  These were both prominent Jewish men who risked a great deal by associating themselves with One Who had been rejected by their own religious leaders as a blasphemer and crucified by the Romans as a traitor.

Our Lord’s Passion shook all of His followers to their core.  John was the only one of the twelve to stand at the foot the Cross, for the others had run away in fear.  Peter, the head disciple, had denied the Savior three times.  They were all shocked and horribly disappointed that their Messiah had failed to set up an earthly kingdom; instead, He had been killed by His enemies.  Death had apparently had the final word on Jesus of Nazareth.  Overcome with fear and despair, His closest followers ran away and hid.

The Myrrh-Bearing Women, along with Sts. Joseph and Nicodemus, knew bitter grief also.  They saw His crucifixion as a complete disaster and their hopes for Him were destroyed.  Amidst their horrific pain, however, they refused to think only of themselves.  They responded very differently from the disciples because they remained focused on showing their love for Jesus Christ as best they could.  That meant doing the sorrowful task of giving their departed Lord and friend a decent burial.  They accepted the risk of identifying themselves even further with One Who had just been crucified as a blasphemer and a traitor.  Despite their shock and grief, they found the courage and strength to risk everything by maintaining their devotion to Christ as best they could in these awful circumstances.

What they did was not about serving themselves in any way; they could not have hoped to have gained anything from anyone by doing it. Their selfless devotion put the women in the position to see the Lord’s empty tomb and to hear from the angel that He is risen. The good news of the Savior’s resurrection was shocking to the point of absurdity, for “they went out quickly and fled from the tomb; for trembling and astonishment had come upon them; and they said nothing to anyone, for they were afraid.”  To see and hear what they did was not to receive confirmation that they had been right all along.  Remember that they had expected to anoint a dead body.  To see and hear what they did was not to get what they wanted from religion so that they could go back to life as usual with an optimistic or pious attitude.  No, to see and hear what they did was to encounter God from the depths of their souls in a way that called them and all they had assumed about life in the world into question.  Their eyes were opened to behold the joy of the resurrection not because they had everything figured out or had warm feelings about the Savior, but because they stood firm in their devotion to Him, even when all seemed lost and there was nothing left to do but anoint His dead body.

It may be easy to think that we have devoted ourselves to the Lord quite well when we believe that we are getting what we want from religion.  Perhaps we attribute the happiness of our marriages and families to our faith.  Maybe we see our physical health, financial success, or good reputation among our peers as a reward for our dedication to God.  Of course, all the good things of this life are God’s blessings and we should be grateful for them.  We must be on guard, however, against the subtle temptation of thinking that entrusting ourselves to Christ leads to this or that positive result in the world.  It is so easy to view devotion to the Lord as a means to serving our own ends.  If we want to see where that leads, remember the disciples fleeing in fear when the Cross revealed that Christ was not the Messiah they had expected.  Any of the blessings of this life can disappear in an instant and the same is true of a faith based on the belief that God should give us what we want on our own terms.

The devotion of the Myrrh-Bearers, Joseph, and Nicodemus shines all the more brightly because, even in the midst of their deep despair about the fulfillment of their desires, they refused to abandon Christ.  That is what true faith looks like, and we will never acquire it by running away or merely becoming indifferent when we do not get what we want for ourselves, our loved ones, or our world.  Entrusting ourselves to the Crucified and Risen Lord requires engaging in a persistent struggle to reorient the deepest desires of our hearts for fulfillment in Him, especially when we find it hard to see any signs of His presence in our lives.  Growing in true faith demands that we focus our energies on opening our souls to His healing power, especially when we are sorely tempted to think that there is no hope for the likes of us.

Practically speaking, we must mindfully reject thoughts that tempt us to abandon Christ even as we focus our minds on the words of the Jesus Prayer.  Each day of our lives, we must refuse to invest ourselves in serving the false gods of our own vain imaginations and instead embrace the basic spiritual disciplines of the Christian life in order to serve Christ in the life of His Body, the Church, and in our neighbors. The struggle to do so will often be inconvenient and frustrating, and at times we will perceive no visible signs of progress.  We will grow in the faith necessary to behold the joy of the resurrection not by imagining that we are effortlessly going from success to success, but by steadfastly remaining focused on serving our Lord in the humble ways that are available to us today, regardless of how well we think things are going.  At times, our hearts will be broken by our own dashed hopes for ourselves and others.  But if we remain vigilant in our dedication to Christ, then we—like the Myrrh-Bearing Women—will be completely shocked to know the joy of the Risen Lord. As we continue to celebrate this blessed season of Pascha, let us all do precisely that as we invest ourselves in serving the Savior, for there is simply no other way to enter into the eternal blessedness that none of us has earned, deserves, or has any right to expect, for Christ is Risen!