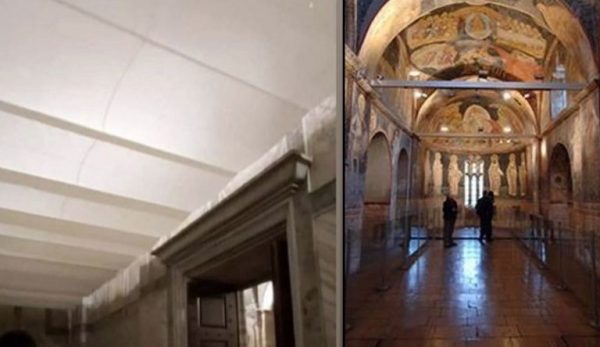 The Turkish government is rapidly converting the Chora Church into a mosque, shortly after the conversion into a mosque of another World Heritage Site, Hagia Sophia.

They installed a drop ceiling, scratched everything out, put plasters on the walls, and painted them in order to cover the wonderful frescoes and mosaics of the church and to erase every Orthodox sign.

In addition, the first Muslim prayer will take place on the 30th of October in the Chora Church, which will be used as a mosque. It is noteworthy that the Greco-Roman (Byzantine) monument was not used for religious reasons for 72 years. Turkish President Recep Tayyip Erdoğan will reportedly attend the first Muslim prayer.

According to the Turkish news channel TRT HABER, the prayer was announced in a post on Twitter by the president of the Directorate of Religious Affairs, Ali Erbaş.

In a post with a picture of the Chora Church, Ali Erbaş calls it “Kariye Mosque” and states that it was decided to reopen it for Muslim worship on Friday, the 30th of October. “May God (Allah) be pleased with the prayers from the minarets,” he added.

In connection with this, the deputy head of the Synodal Department for External Church Relations, Archpriest Nikolay Balashov, expressed his shock over the change, “This is the Chora Monastery in Istanbul after it was ‘adjusted’ to be used as a mosque. This is what happened to it. The horror of modern-day barbarity. This is a disaster for Orthodox Christians. The survived vivid evidence of what Constantinople, Tsargrad, and the Mother of Cities used to be is being buried right in front of our eyes, vanishing into oblivion… Those who see shall perceive”.

Most viewed articles
What Is Rejected Becomes the Cornerstone118
Hierarch of the Jerusalem Patriarchate Speaks in Support of His Holiness Patriarch Kirill86
His Beatitude Patriarch Theophilos III and bishops of the Russian Church Abroad attend a concert marking the 150th anniversary of the birth of Sergei Rachmaninoff in Jerusalem85
Utah Church Prepares, Welcomes All for Consecration83
The Savior of the Hopeless, or Is It Possible to Be a Good Person and Not Be Saved?69
The Forgotten Virtue of Stability60
Supreme Court Overturns Roe v. Wade in Mississippi Abortion Ruling59
‘The post-Roe generation’: Pro-lifers set their eyes on heartbeat bills, chemical abortion bans47
Most popular authors
Pravmir.com team254
Archpriest John Moses (+2019)118
Alexander Tkachenko69
Hieromonk Gabriel60
CBN News59
Ryan Foley47