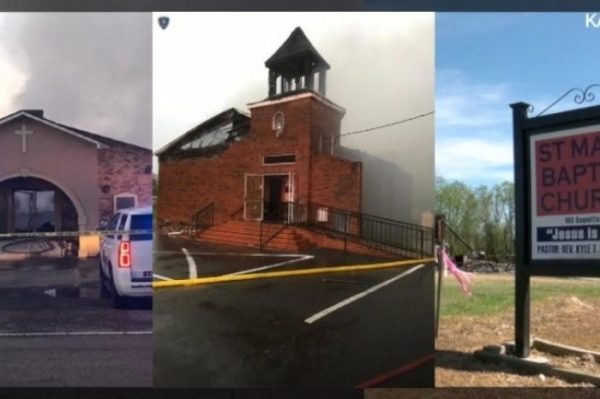 A collage of the three historically black churches in Louisiana that were burnt to the ground between March and April 2019. | GoFundMe

Donations to restore three historically black churches torched in alleged arson attacks in Louisiana are pouring in after high profile figures like Hillary Clinton asked the public to remember them too when more than $700 millionwas quickly raised to restore the famed Notre Dame cathedral in France.

“As we hold Paris in our thoughts today, let’s also send some love to our neighbors in Louisiana. Three historically black churches have burned in recent weeks, charring buildings and scattering communities,” Clinton tweeted Tuesday with a link to a GoFundMe campaign that had initially been struggling to raise the $1.8 million needed to restore the three churches.

Mount Pleasant Baptist Church became the third historically black church over 100 years old to burn down in St. Landry Parish, in a span of 10 days earlier this month. St. Mary’s Baptist Church was the first reported church fire on March 26 and Greater Union Baptist Church went up in flames a week later.

Last Wednesday, the Seventh District Baptist Association, a 149-year-old nonprofit religious organization, launched the GoFundMe campaign seeking to raise the $1.8 million to evenly distribute between the three churches to help them rebuild. On Monday morning, even after retired Christian New Orleans Saints tight end Benjamin Watson, urged his supporters on Twitter over the weekend to support it, only about $60,000 had been raised.