The Orthodox churches of Uzbekistan have introduced a new procedure for the rite of baptism which provides for attending 12 Sunday lectures and passing exams.

“I have visited Tashkent’s St. Uspenskiy Cathedral Church to find out how to baptise my son and learnt that this is a whole problem,” a 28-year old resident of the Uzbek capital, Olga, has said. 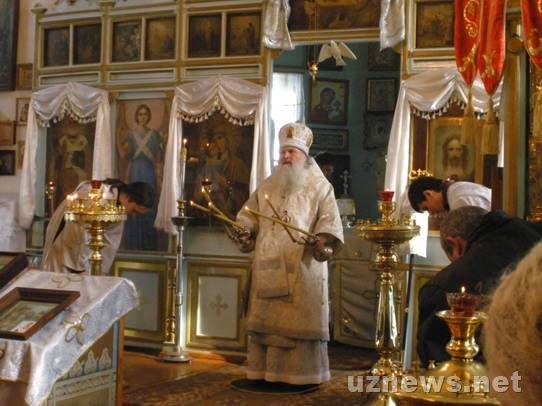 The new leader of the Uzbek eparchy, Metropolitan Vikentiy

Who will agree to become a godfather?

According to Olga, would-be godparents will now have to attend Sunday catechetical lectures which will explain the essence of Christianity and the main point and meaning of baptism.

After attending a total of 12 catechetical lectures, would-be godparents and those who want to be baptised, if they are already 15, will have to pass exams.

The matter is not about simple formality. “Skiving”, like at school, will be impossible because the attendance of catechetical lectures will be registered as visitors “have to sign in some book”.

“Where will I find godparents for my son under such conditions?” Olga wonders.

According to her, all her friends who had earlier been willing to become a godmother or a godfather have now refused politely to do so after learning that they will have to visit the church on Sundays for three months.

“It is a right thing that catechetical lectures and exams were introduced, otherwise people have been becoming godparents for no particular reason but just to drink during christening parties without having any idea about their new obligations,” a 50-year old member of Tashkent’s Saint Uspenskiy Church, Marina, has said.

She said that godparents would have to help their godchildren in the future in both practical circumstances and “in their kind and Christian education”.

“As for adults willing to be baptised, God ordered them to attend 12 catechetical lectures, otherwise many get baptised because it is just in fashion and they do not even know the basics of Orthodox Christianity,” a friend of hers, pensioner Mariya, added.

Many link the innovations at the Tashkent and Uzbekistan eparchy of the Russian Orthodox church’s Central Asian metropolitan area with the new leader of the church, Metropolitan Vikentiy, who came late in August 2011.

“Metropolitan Vikentiy has decided to revive old traditions and strengthen his confidence in orthodox believers,” members of the church have spoken of him respectfully.

The decision to hold 12 compulsory catechetical lectures before the rite of baptism was adopted at the 4 October 2011 eparchy clergy meeting at Tashkent’s eparchy directorate.

Since that day, catechetical lectures have been mandatory for all priests of the Tashkent and Uzbekistan eparchy.

The practice of baptism without catechetical lectures is only allowed for a person if he is seriously ill or about to die.

The meeting also decided that “it will be mandatory for both for children and adults to undergo the sacrament of baptism through full immersion” in a big baptismal bowl instead of previously practiced aspersion with holy water.

There is always a way out

“Not everyone likes the church innovation but there is a way out from any situation,” a 35-year old would-be godfather, Maksim, has said.

According to Maksim, the Tashkent eparchy understands that the innovation was a little bit too much and they are ready for compromise to prevent the alienation of less committed believers form the church.

“When I announced at the Saint Uspenskiy cathedral church that because of certain circumstances I am not able to come to the church every Sunday, I was offered to buy a disc of catechetical lectures for 8,000 sums [about 2.5 dollars] and to listen to them at any time comfortable for me and then pass the exams,” says Lyudmila, who is going to become a godmother of her niece.

“It is quite obvious that catechetical lectures for future godparents were introduced in order to make people more religious and to attract new members to Orthodox churches at the same time, but this is not fair at all,” a 30-year old Tashkent resident, Elena, has said.

In her opinion, mandatory catechetical lectures should be given only to adult people who want to receive baptism: “if they want to get baptised, let them learn more about orthodox Christianity.”

“And for those who have decided to become godparents it is enough for them to listen to a lecture about the rights and duties of godparents and to get a two-page booklet,” Elena suggested.

She thinks that this will also help people to learn more about religion and preserve a democratic atmosphere in Uzbekistan’s orthodox churches that is so necessary “at present difficult realities of life”.