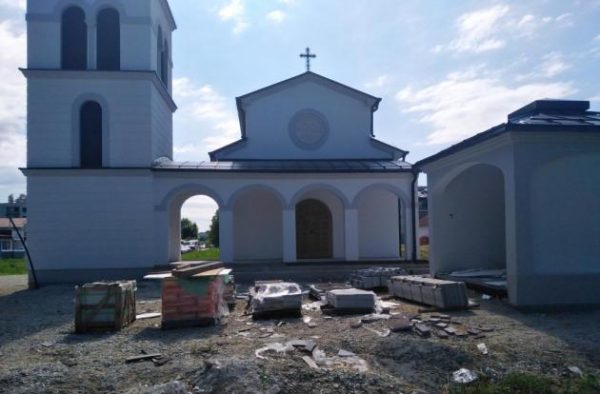 Unknown people burst into the courtyard of the Church of the Synaxis of Serbian Saints, smashed the mosaics and granite slabs for wall cladding, as well as the stairs, which had been prepared for installation. The incident took place in the town of Vrginmost in the Kordun region, Croatia, on the night of June 14, 2021, reports the Gorno-Karlovatskaya Diocese of the Serbian Orthodox Church.

Over the past two years, the church has often been attacked by vandals, thieves and desecrators, said Archpriest Mile Ristic. The Vrginmost police have been informed about this act of vandalism.

The President of the Association of Serbs of the Region, Miodrag Linta, called on Croatian law enforcement officers to urgently find the perpetrators.

“This case speaks volumes about the existing threat to the Orthodox heritage and religious buildings in Croatia, it is an ominous signal to the Serbs remaining in Vrginmost and the entire region that they cannot feel safe in their homes,” Linta warned.

According to him, 26 years after the end of the war, hatred and intolerance towards Serbs and everything Serbian still prevails in Croatia.