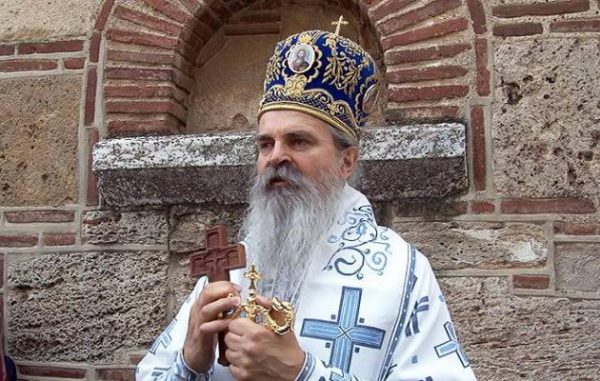 His Grace Bishop Teodosije of Raška and Prizren of the Serbian Orthodox Church published an appeal yesterday to his flock in Kosovo and Metohije, imploring them not to leave their homes, thereby abandoning their holy churches, monasteries, and cemeteries as well. His appeal was published at Mitropolija.com on September 23.

The Orthodox faithful of Kosovo live under the constant threat of persecution and attacks against themselves, their homes, and their holy sites.

“The Serbian Orthodox people have lived in the lands of Stara Raška, Kosovo and Metohije for centuries, where the deepest roots of our spiritual existence spread, embodied in the numerous holy sites of our Church,” His Grace opens his appeal, published by the Diocese of Raška and Prizren.

The holy sites have “shone like beacons” for centuries in Kosovo, showing that the Orthodox people belong there, Bp. Teodosije says, adding that they seek only to preserve what belongs to them. The land, inherited by the present generation through the suffering of their ancestors, is no mere land, His Grace adds.

“Following the covenant of St. Lazar … I paternally urge our faithful people to stay at their centuries-old homes and not to leave to other people the property that our ancestors saved and preserved with difficulty during the most difficult times of Turkish rule, during numerous wars and disasters. This is not ordinary land that can be sold or bought; it is land sown with the bones of our ancestors, consecrated by prayers, sprinkled with the tears of laborers and drenched in the blood of martyrs,” he writes.

The Orthodox faithful should remain in their Kosovo homes and thus become “guardians of our identity and our holy sites,” His Grace implores. The Orthodox faith has protected the people for centuries “in the whirlwind of historic events,” making them the people of God and heirs to the great saints who have shone forth in Kosovo.

All the faithful are united in Christ “as one body and one soul,” Bp. Teodosije writes, and while a family may improve its lot externally by selling its home, it makes the situation harder for those Orthodox Serbs remains, he warns. “Is this temporary consolation comparable to the consciousness and remorse that we have thus aggravated the situation of our relatives and neighbors?” he asks.

In conclusion, His Grace calls on his flock to manifest Christian patience and love, remembering the Lord’s words: For what is a man profited, if he shall gain the whole world, and lose his own soul? (Mt. 16:26).

Moscow Priests Make Over 1,300 Visits to Patients with Coronavirus

The early printed book was published in the printing house of the Pochaev Lavra.