Source: DECR
Natalya Mihailova | 14 May 2014
On the day of the 69th anniversary of the end of the Great Patriotic War, the faithful of the Moscow Patriarchate in various countries and various continents honoured the memory of soldiers who defeated Fascism. 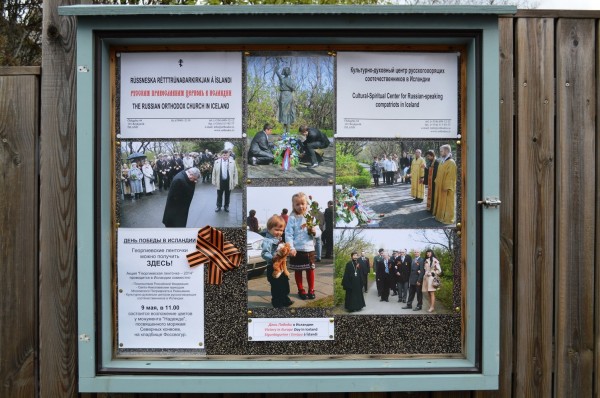 With the blessing of His Holiness Patriarch Kirill of Moscow and All Russia, special petitions and prayers were voiced during the Office of Thanksgiving to the Lord God for having granted victory in the 1941-1945 Great Patriotic War.

In his homily after the service, Archbishop Justinian reminded the faithful of the tragic war days, saying that “the people of the United States of America were a helper and ally of Russia in the war against fascist Germany, providing both arms and food and later opening the Second Front, when Russian and American soldiers forged together a truly hard victory. And it would be unpardonable for us to forget these pages of history because there is life ahead with its own trials which can again demand the common efforts and work of the USA and Russia. Remembering the glorious past, we should strengthen our mutual respect and love in the present so that we could cope together in the future with possible enemies and hardships”.

Then a requiem service was said for “the ever-remembered commanders and soldiers who gave their lives at the battlefield for the faith and the Motherland, who died of wounds and starvation, for those civilians who were tortures and killed in captivity and at bitter works and for all those who worked for the victory”.

Archbishop Justinian hailed parishioners Vasily Kalinchuk and Mikhail Krug, WWII veterans, US Armed Forces servicemen. On behalf of the clergy and parishioners he congratulated them on the Victory Day, wishing them sound health and many years of life. He also reminded the congregation that after the war Vasily and Mikhail made great efforts for developing the parish life and preserving the St. Nicholas Cathedral under the jurisdiction of the Russian Orthodox Church.

On May 8, the Diocese of Chersonese, with an active support of the clergy and laity of the Cathedral Church of the Three Hierarchs in Paris, held a memorial event devoted to the memory of the defenders of the Motherland who rose to struggle against the fascist aggressor. The clergy and laity sang war songs, viewed documentaries about the Great Patriotic War and shared frontline stories.

On May 10, at the cemeteries in Budapest and Gödöllő in Hungary, the rector of the Russian Parish of the Holy Trinity, Rev. Dimitry Kornilov, and Deacon Svyatoslav Bulakh together with parishioners, including Sunday school children, said a prayer at the graves of soldiers who were killed in action during the Great Patriotic War. After the requiem, they laid wreaths at the central stele and several common graves. Six hundred red carnations tied up with the Ribbon of St. George adorn now the burial places of Soviet soldiers in the two Hungarian cities’ cemeteries in which thousands of our compatriots were buried. 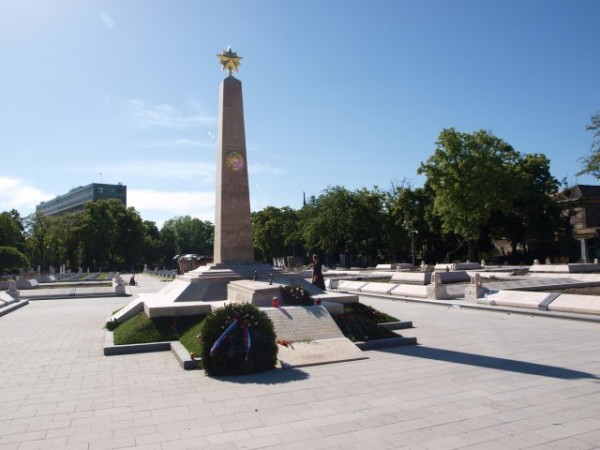 On the Victory Day, at the city cemetery in Aarhus, Denmark, flowers were laid to the graves of Russian soldiers who gave their lives for the freedom and independence of Russia and European countries. Rev. Sergiy Bondarev, rector of the Parish of St. Alexander Nevsky in Copenhagen, conducted the memorial office for the dead. 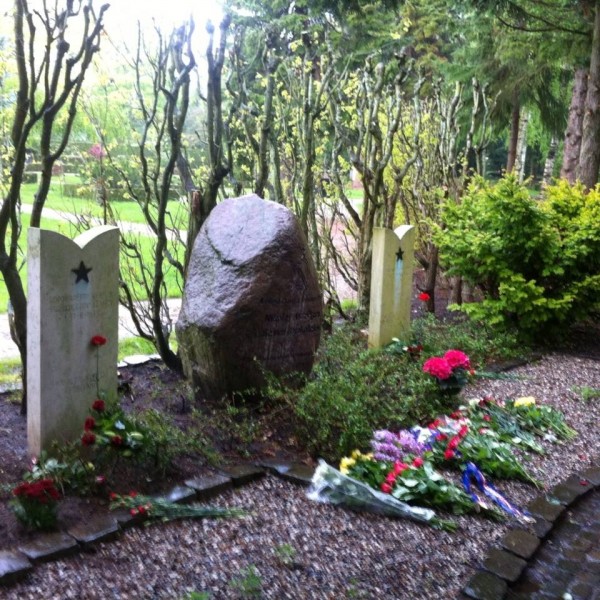 The graves of Russian soldiers in Aarhus

On May 9, in all the Orthodox churches in Thailand, requiem services were held for the repose of those who were killed in the 1941-1945 Great Patriotic War. The faithful honoured the memory of not only soldiers and officers who were killed in action, but also those who died of diseases and labour in the rear, who were tortured by fascists in concentration camps and who died in the Leningrad siege.

Special lessons of fortitude were held at Sunday schools, with clergy and teachers telling children stories about heroism shown by defenders of the Motherland.

Especially solemn was the Victory Day celebrations in Pattaya, where most of the Russian-speaking people reside. After the requiem service at the church of All Saints, celebrated by Archimandrite Oleg (Cherepanin), there was a grand reception given by the Pattaya business community. There was a special group of Russian war veterans who were invited to come for the event from Russia and to have a two-week rest in Thailand. Present at the reception were leaders of the Chonburi Province and the city of Pattaya, Orthodox clergy and numerous guests. Greeting the assembly, Father Oleg honoured the memory of heroes and expressed cordial gratitude to war veterans for their military feat. He also pointed to the importance of celebrating the Victory Day in Thailand. Then soloists from the Alexandrov Song and Dance Ensemble of the Russian Army recited songs which were popular during the war, and local creative teams delivered a performance. In conclusion of the celebrations, a festive salute was fired.

On May 9, a ceremony of laying flowers at the Hope Memorial dedicated to the Arctic Convoy seamen took place at the Fossvogur cemetery in Reykjavik.

The ceremony was attended by Russian Ambassador A. Vasilyev, diplomats accredited in Iceland, representatives of the Iceland’s Ministry for Foreign Affairs and the Islandic Cost Guards, WWII veterans and their families as well as numerous Russians living in Iceland today.

In his speech of greetings, Mr. Vasilyev pointed to the uniting meaning of the Victory Day for descendants of those who fought against fascism and to the role which was played by Iceland in the common victory. He also spoke of the importance of preserving the just historical memory of the results of World War II.

The rector of the Moscow Patriarchate Parish of St. Nicholas, Rev. Timofey Zolotusky, said the requiem for the repose of the souls “of all the soldiers who died for the faith, the Motherland and the people and all those who died of suffering during the Great Patriotic War”. The participants in the ceremony lifted up prayers for “the repose of the souls of the late brothers and sisters killed in Odessa and all the dead servants of God who died in the fratricidal disturbances in Ukraine”. During the ceremony, the Ribbon of St. George was distributed as part of the action of the same name.

To mark the 69th anniversary of the Victory in the Great Patriotic War and the liberation of northern Norway by Soviet troops, a solemn ceremony with the laying of flowers was held on May 8 at the former Falstad concentration camp in Trondheim with the participation of representatives of the Norwegian Ministry of Defence, war veterans, scouts, local people and parishioners. After the ceremony, the Rev. Alexander Volokhan conducted the service for the dead at the spot where Soviet and Yugoslavian soldiers were executed by shooting.

On May 7 and 8, Father Alexander conducted services for the dead soldiers in the Polar Circle, at the Tyotta War Cemetery in northern Norway. 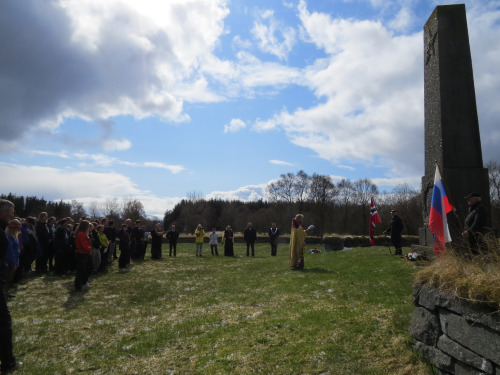 On the Victory Day, at the church of St. Andrew the First-Called in Naples, the rector of the parish, Archpriest Igor Vyzhanov, celebrated a thanksgiving and said the office for the dead for “the ever-remembered commanders and soldiers who gave their lives at the battlefield for the faith and the Motherland”.

In the evening, a group of parishioners made of young Orthodox Italians and Russians, who are actors at the Kostya Treplev Theatre acting in Naples, performed a drama called “Vasiliy Ivanych” after A. Tvardovsky’s famous poem “Vasily Terkin”.

From May 4 to 11, the Moscow Patriarchate parishes in Denmark, Iceland, Italy, Norway, and Sweden held the Ribbon of St. George event in memory of those who were killed in the Great Patriotic War and those who worked for the Great victory.