“We Categorically Reject” What is Happening in Orthodox World, Pat. John of Antioch Tells Russian Delegation 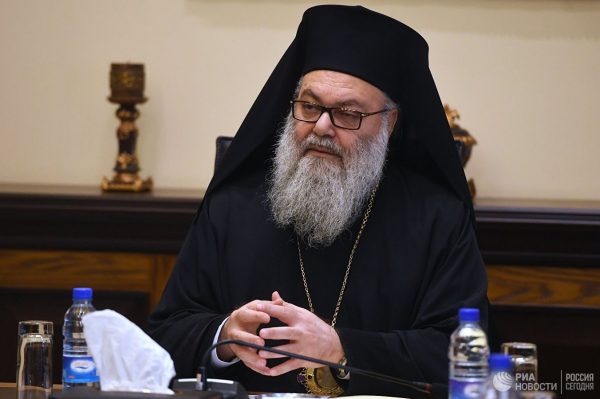 The Church of Antioch firmly rejects the division of the Orthodox Churches and supports the position of the canonical Ukrainian Church and the Russian Church in the ongoing Ukrainian crisis, His Beatitude Patriarch John X of Antioch and All the East said at a meeting with a Russian delegation on Thursday, reports RIA-Novosti.

The delegation was in Syria to sign an agreement on cooperation between Sevastopol and the Syrian city of Tartus and also had the opportunity to meet with the Antiochiah primate.

“What is happening now in the Orthodox world, often aimed at the division and weakening of Orthodox people, we categorically reject,” the Patriarch said.

“We, as an Orthodox Church, very much want to preserve the unity of the Orthodox in the world… We are very deeply worried about the situation that has unfolded and we fully support you in this matter,” His Beatitude stressed.

He also recalled that the Antiochian Church had addressed the Ecumenical Patriarch and “in every way asked him to undertake endeavors aimed at uniting the Church and eliminating the disagreements that have arisen.”

The Holy Synod of the Antiochian Church made a statement in early October, calling for Patriarch Bartholomew to convene a pan-Orthodox council on the matter and warning that unilateral actions and the establishing of parallel jurisdictions do nothing to solve divisions and unite the Church. Pat. John renewed the call for a pan-Orthodox council in his response to Pat. Bartholomew’s request to recognize the results of December 15’s “unification council,” though Pat. Bartholomew explicitly rejected this call.

A joint statement between Pat. John and His Holiness Patriarch Irinej of Serbia in October also called for a pan-Orthodox solution to the Ukrainian problem.

The Russian delegation also invited Pat. John to take part in the celebration of the 10th anniversary of Patriarch Kirill’s enthronement on February 1.