Source: RT
Natalya Mihailova | 15 February 2016
A new clash of world powers should be prevented at all costs, Russian Orthodox Church head Patriarch Kirill said in an exclusive interview with RT America’s Ed Schultz, stressing that both Russia and the US must do “everything possible” to improve relations. 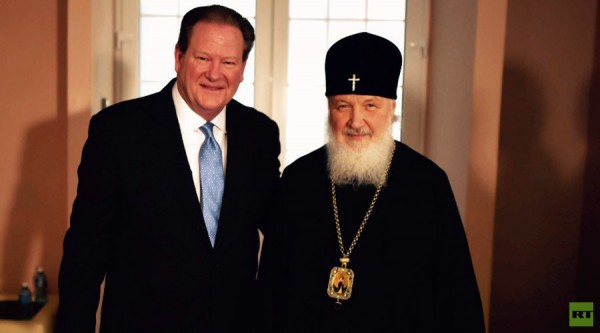 Speaking to Schulz, Patriarch Kirill warned that a confrontation between “two major powers” with “immense destructive force” had the potential to devastate “the whole world,” calling for an improvement in relations between Russia and the United States as soon as possible.

“A large-scale war should be averted at all costs,” he said, adding that it should be the “number one priority for the Americans, the Russians, and many other people with a sensible perspective on what is happening.”

The Patriarch stressed that most people in the US are “Christians who share the same values and belong to the same global Christian family” as Russians, urging the two nations to use this cultural affinity “to build bridges, rather than deepen the divide” between the two countries.

In talking about potential initiatives for improving relations between the two states, Patriarch Kirill offered an example from the Cold War era, when US and Soviet Christians worked together “for a better future.”

“We had intensive contacts with the US Christian community, including delegation visits and conferences in an effort to work out a concerted Christian approach to the issues that divided the US and the Soviet Union,” he said, calling on the Christian communities of both countries to continue such efforts.

Addressing the crisis in the Middle East, the Patriarch called on all countries seeking to put an end to the wars in Syria and Iraq, as well as to defeat terrorist groups, “to join their efforts for the sake of [this] goal.”

According to the Patriarch, the current situation in the Middle East requires joint action by all parties concerned, including“Russia, the United States, Western Europe, and some Arab countries.”

He also said that the terrorists in the region should be defeated by military means, as one “cannot deal with terrorists through dialogue and exhortations alone.”

The Patriarch also stressed the importance of providing Syrians and Iraqis “with an opportunity to freely choose their future, so that these countries can live in peace and so that all religious groups, Christian or Muslim, can live side by side in peace.”

Patriarch Kirill and Pope Francis met in Havana, Cuba last week, marking the first time in that the heads of the Orthodox and Catholic Churches have sat at the same table since the two confessions split about 1,000 years ago. They signed a joint declaration afterwards, calling on world leaders to prevent Christians in the Middle East from “being completely exterminated” and to aid the refugees from those regions.

The two religious leaders also discussed relations between the Churches and the problems their believers are facing in the modern world. They also exchanged views on the progress of human civilization.

“We are brothers, at last,” were the first words Pope Francis addressed to his counterpart when they met, TASS news agency reports.