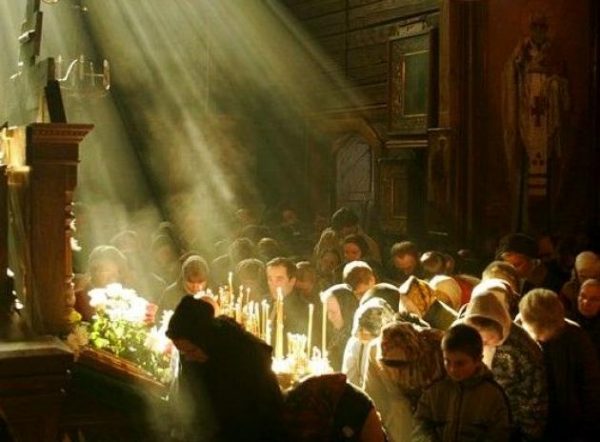 It is very joyful that a lot of people come to the church on the feast of Christ’s Baptism. This can also happen only on Easter and Palm Sunday. On other holidays and Sundays, there are significantly fewer people. Maybe this is because the majority of people does not know why they need to go to church, and those who go do not know how to correctly explain this to others.

The feast of Theophany explains the essence of our faith best of all.

When the Lord was baptized in the Jordan River by St. John, at that moment the Holy Spirit came upon him in the form of a dove and a voice came from heaven: “You are my beloved Son; in whom I am well pleased” (Mark 1: 9–11). So for the first time three Persons of the Holy Trinity were revealed in the New Testament: the Father, the Son and the Holy Spirit. It was in honor of the Holy Trinity that we, dear brothers and sisters, received holy Baptism in childhood.

The unity of the three Hypostases in a single Essence, according to the Holy Fathers, points to one of the main goals of Christian life: unity with God and other people in gracious love.

Is there such a unity in love between us? There are very few happy families in which there is complete harmony between a man and a woman, parents and children. There are more discord and hatred in society. How to achieve unity in the image of the Holy Trinity?

Sins separate us most of all. And therefore the path to unity lies through repentance, to which the Lord Himself calls and the Holy Prophet John called before Baptism: “Repent, for the Kingdom of Heaven is at hand” (Matthew 3: 2; 4:17).

St. John Chrysostom names five ways of repentance: the first is the condemnation of one’s sins, the second is the forgiveness of the sins of one’s neighbors, the third consists in prayer, the fourth is alms, the fifth is humble wisdom (reasonable humility). He calls not to stay lazy, but to go every day along all these paths, because they are convenient, and you cannot justify yourself by poverty. Indeed, even if you live the poorest of all, you can still subjugate your anger, humble yourself, pray earnestly, and condemn your own sins. So, poverty is no obstacle. Even on the path of repentance, where you need to spend money (meaning alms): even there poverty does not at all prevent us from fulfilling the commandment, as shown by the widow, who put two mites (see Mark 12:42).

The best place to repent is the house of God. Here, through the non-hypocritical Confession, participation in the Sacrament of the Eucharist, we all have the opportunity to unite with Christ Himself and embark on the path of eternal life.

Whoever neglects prayer and does not get down to Confession and Communion or deviates into schism or a sect, becomes spiritually dead. Because every sin that we carry out by deed, word or thought, first paralyzes us, that is, takes away the power to do real good, and eventually it kills us. And then we are not only incapable of doing good deeds, but we infect others with our cadaverous poison, so we become distributors of evil.

Why does it happen that many people don’t hear, or rather take aggressively, the call of Christ and His Church to repentance?

Most people want to justify themselves by busyness. Some consider themselves self-sufficient and do not want to bow to anyone. Others, because of their constant lies and deceit, are afraid to awaken conscience in themselves, the torment of which is very painful. Many of all these people pass to schismatics or sectarians who only imitate the Church and church life, but do not have the power of God, because they lost it when they fell apart from the true Church because of their pride.

Those who have never felt pleasure in the grace of God also fall apart from the Church and fight with It. Although, there are those who had previously felt it, but because of frequent compromises with their conscience regarding repentance of their sins, they lost the taste of enjoying it. Now they think that grace is in patriotism, nationalism, and the struggle for human dignity. Poor people do not understand that all of the above has a relative value and completely loses its price when we meet with Christ. In the light of Christ’s love, all national borders are erased. Patriotism and real human dignity are acquired only when a person does not fight for his rights and freedoms, but truly humbles himself. But, unfortunately, few people can admit this. For most, an aggressive revolutionary struggle for truth is acceptable. It’s a pity that they don’t remember what it led to 100 years ago.

And yet, no matter how these people shy away from the Truth, no matter how hateful they may be towards us, we should learn to love them and pray sincerely for them, just like Christ for His crucifiers, so that they too took the path of salvation. It is extremely difficult for them to turn to us, because they have lost the true sense of God’s grace, and we still can love them. Remember that only through the power of grace and our good deeds they can be converted to the Church of God and the unity of all in the image of the Holy Trinity can be achieved. Amen!

Most viewed articles
Metropolitan Hilarion: The unity between the Ukrainian Orthodox Church and the Russian Orthodox Church is preserved249
How to Get Rid of Spiritual Infantilism?112
How to Respond to Opposition to the Gospel110
A Piece of Rock Falls Down on the Skete of St. Anna on Mt. Athos94
Three Words82
His Beatitude Metropolitan Tikhon Issues Statement on Tragic School Shooting in Texas74
Romanian priests in Madrid draw conclusions on the benefit of praying together with family members57
test1
Most popular authors
Metropolitan Hilarion (Alfeyev)249
Priest Andrei Chizhenko112
Archpriest Basil Ross Aden110
Pravmir.com team94
Archpriest Geoffrey Korz82
Metropolitan Tikhon of All America and Canada74
Aurelian Iftimiu57
Maria Trushanina1