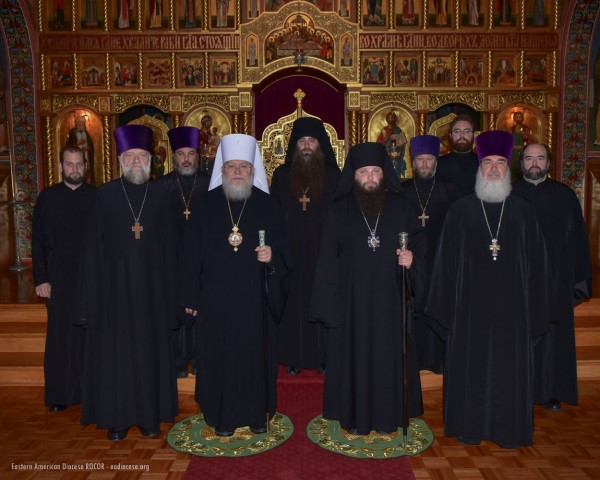 Beloved, I beg you as sojourners and pilgrims, abstain from fleshly lusts
which war against the soul, having your conduct honorable among the Gentiles,
that when they speak against you as evildoers, they may, by your good works
which they observe, glorify God in the day of visitation.
– I Peter 2:11-12

With the legalization of same-sex marriage by the Supreme Court of the United States on June 26, 2015, the situation facing Christians living in America grows more adverse. Our humanistic society makes plain its continued alignment against Christ and His Church. We see in this judicial decision a willingness by both the state and those who support such rulings to deny even the basic principles of Christian moral teaching, even to label these timeless precepts of our Faith “hate.” Sadly, we see among this number fellow Orthodox Christians.

St. John the Theologian wrote in apostolic times that “the whole world lieth in evil” (I John 5:19). What, then, can we say about our own world? The modern world beguiles many who call themselves Christian into believing that “love” is the inspiration behind the support of Supreme Court’s decision endorsing same-sex marriage. But in reality the modern world aims at requiring us who follow Christ into pretending that sin does not exist, and that we happily applaud our brothers’ path to perdition. We should not be fooled into calling this “love,” but must see it for what it is. Many will say that as Christians we must not judge, but indeed our Lord tells us to “judge with righteous judgment” (John 7:24), and we must not label sin a virtue.

Under the cover of this deceptive exterior, which leads so many into delusion, there is taking place a powerful and now not-so-hiddenattack against Christianity. This assault is subtle and far more dangerous than open persecution, for it threatens not physical death, but a devastation of souls – spiritual death, fed by apathy and comfort. This is achieved when built-up human pride, which leads away from God, begins boldly to reject the very existence of God. Seized with pride, self-assurance, and reliance on his own powers, possibilities, and capacities, man raised in the ideals of humanism and materialism no longer sees any obligation to strive for the spiritual perfection enjoined by the Gospel and, as a natural consequence, descends ever deeper into moral corruption.

We must recognize this if we hope to understand what leads people to accept such immoral acts and promote the legitimacy of same-sex marriage. This is yet another form of temptation that we must face. A free society does not “liberate” the Church from what She has been given and has faithfully taught for two millennia: that no sinful lifestyle, including one freely engaging in unnatural biological acts, is compatible with Christianity; that those who pursue such lifestyles cannot live a full sacramental life in the Church; and that the Orthodox Church will never redefine the mystical, matrimonial union of man and woman, as that union reflects the bond between God and His chosen people, between Christ and His Church.

It is essential that we not forget that it is God Who created the two sexes, and established marriage at the time of creation, as our Lord Jesus Christ tells us: “…from the beginning of the creation God made them male and female. For this cause shall a man leave his father and mother, and cleave to his wife; and the two shall become one flesh. So they are no longer two but one flesh. What therefore God hath joined together, let not man put asunder” (Mark 10:6-10; cf. Genesis 1:27; 2:24; 5:2). One of the primary and divine purposes of marriage – one that many of our country’s leaders have forgotten – is the procreation of children: “be fruitful and multiply” (Genesis 1:28). As we are reminded in special petitions of the Great Litany of the Wedding Service, “that He (God) will grant unto them chastity and the fruit of the womb as is expedient for them,” “that He will make them glad with the sight of sons and daughters,” and “that He will grant them the procreation of virtuous offspring.” And further, in the prayer that follows this litany, the priest prays that the couple “increase and multiply,” have a “peaceful life, length of days, chastity, mutual love in the bond of peace, long-lived seed,” and that they are vouchsafed to “behold their children’s children.” With regard to the duty of spouses to preserve mutual faithfulness, Christ said: “What therefore God hath joined together, let no man put asunder” (Matthew 19:6).

Sexual life enhances love and adorns marital harmony. Outside of marriage, the manifestation of sexual instinct can easily become an independent force that destroys the fullness of the personality. This damage is especially dangerous because all of the high creative impulses of man are closely tied to his sexual life. Sexual restraint heightens spiritual powers, but sexual dissipation weakens them. Thus, we are called upon to preserve our personal moral purity because our bodies, according to the word of the Apostle Paul, are members of Christ and temples of the Holy Spirit (I Corinthians 6: 19).

We call upon our flock not to despair, but rather to strengthen your prayers, first and foremost for those who – now more than ever – are led astray: those afflicted with homosexuality themselves. As every barrier to sin is removed, they are all the more at risk. They – our brothers and sisters – are told from the rooftops to embrace this corrosive passion, to take “pride” in it, and to revile the salvific Gospel teaching as antiquated and hateful. Our hearts ache for these children of God. Let us not forget that they are made in His image, and that any word not spoken in love can fortify in their hearts the grievous lie that the Church means only to condemn, rather than save them.

We likewise repeat the affirmation that the Church is a place for healing spiritual sickness, not a tribunal; that any Orthodox Christian engaging in public discourse must do so with love, must avoid any extremism, and must, most importantly, refrain from claiming to speak authoritatively on behalf of the Church; that homosexual acts can be repented of, and in no way prevents one from returning to the bosom of the Church. We call upon our clergy to uphold the God-inspired teachings of Holy Scripture and the Fathers regarding marriage and family life, and to do so with the love and compassion that must set us apart as Christians, always showing the path to reconciliation with Christ.

Let us pray that the Lord grant us all faith, wisdom, discernment, and courage to follow Him to the end, remembering the words He spoke before undertaking the ultimate sacrifice in His love for us: “In the world you have tribulation, but take courage; I have overcome the world (John 16:33).”