Will the Kingdom of God be Taken from Us?

Source: Sts. Constantine and Helen Greek Orthodox Church
“The kingdom of God will be taken from you and given to other people bearing the fruits of it.” (Mt 21:43)
Priest Luke A. Veronis | 07 September 2020 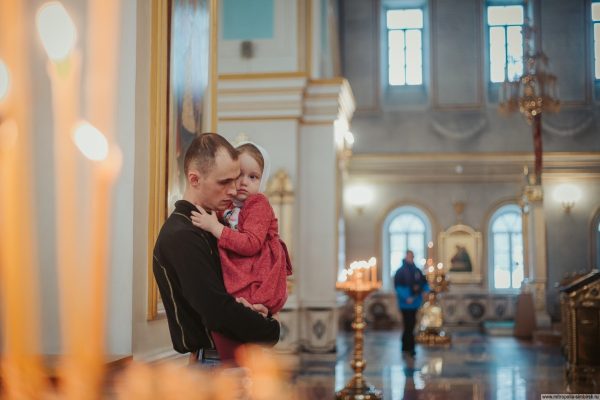 We often preach and talk about God in terms of an all-loving, extremely compassionate, all-merciful and all-forgiving Father – and He is! Our Lord is divine love incarnate – love itself. God is ready to give us a second, third, fifth, tenth and even a hundredth chance when we make mistakes and fall into sin and turn against Him. Yet this same loving Savior, who longs for our salvation and union with Him, realizes that no matter how much He loves us, unless our hearts are open to His love, we ourselves may miss out on His grace. In other words, no matter what God desires, we ourselves can turn away from the kingdom of God.

When Jesus warns that the Kingdom of God will be taken from us and given to other people bearing the fruits of His Kingdom, He is cautioning us that our choices – our lifestyle, our worldview, our faith and the way we choose to live out our lives, either opens us up, or closes us off, from living under the reign of God and experiencing His Kingdom.

I often reflect on the life of Christ, and love to read how the Gospels portray our Lord in such a compassionate and merciful way. A woman who had been married to five husbands and who was living with her sixth man finds Jesus accepting, forgiving, and merciful. A thief and traitor who cheated many people in order to get rich himself was invited by Christ to become one of his disciples. A woman caught in the act of adultery, betraying her marriage vows, is about to be stoned to death by religious authorities yet is given a fresh chance and a new beginning by our Lord. A prodigal son who despises his father, treats his father as dead, abandons his home, and utterly wastes his inheritance is welcomed back as a full son, without any trace of bitterness or resentment or anger. Even the fanatic persecutor Paul is forgiven for his hatred and murder of Christians and given a new opportunity to follow Christ and serve our Savior.

Our Lord was always ready to reach out to those desperate and down and in despair, no matter how sinful and even evil their actions had been. He is always ready to offer a second chance for a new life, that is, He offers a second chance as long as the sinners were open to receive Him, and ready to turn away from their evil ways. People received a new life when they chose to walk in the light of God’s Kingdom. “Go, and sin no more” would often be Christ’s final words, and this admonition reminded people that a change in life was needed to open oneself up to the kingdom of heaven.

The only group of people to whom Christ seemed extremely harsh were to people who were self-righteous and self-assured; to those filled with pride, thinking so well of themselves; to those who were quick to judge and condemn others, while not looking at their own shortcomings and faults; to people who couldn’t forgive others or didn’t want to give people second chances; to those who didn’t practice or live lives of mercy and grace. Jesus sharply criticized such people by calling them hypocrites and vipers, snakes and white-washed tombs.

Our Lord doesn’t desire to take the kingdom of God away from any of us, but he clearly warns us that this will happen, if we don’t imitate His way of life and walk according to His precepts. “Enter by the narrow gate,” Jesus admonishes, “for wide is the gate and broad is the way that leads to destruction, and there are many who go in by it. But narrow is the gate and difficult is the way which leads to life, and there are few who find it.”

The superficial way of the world, the way of hatred and bitterness and anger and spite, the way of jealousy and envy and covetousness, the way of greed and violence,  the way of pride and arrogance and self-righteousness, the way of self-centered pleasure and egocentric fulfillment, the way so common in the world is a broad and wide path that leads away from the kingdom, to destruction. Unfortunately, many take it, but Jesus warns that those who choose such a path are also choosing to close the door on the Kingdom of heaven.

Narrow and difficult is the way of unconditional love, of boundless mercy and limitless forgiveness, of self-denial and self-restraint, of compassion and grace. Few cultivate the spirit that nourishes these virtues and thus, few will walk the path that leads into the Kingdom of God.

I don’t preach sermons too often that focus on the dangers of missing out on the Kingdom of God. People like to hear about how loving and merciful and kind God is. And yet, in today’s Gospel, it is quite clear that Jesus wanted his listeners to realize that many who think that the kingdom of God is theirs will be surprised at the final judgment. If the path is narrow, and only a few are willing to cultivate the humble attitude of trusting in God’s grace (and not in our own efforts) and humbly living a Christ-centered life of love and mercy, forgiveness and grace, then the big question for each of us is whether WE are presently a part of that small crowd or not? Are we a part of the group that goes against the norms of society, and that struggle to live according to the Gospel and our Lord’s commandments?

“The kingdom of God will be taken from you and given to other people bearing the fruits of it.” May we never hear these words directed to us from our Lord, but instead, may we make every effort to orient our lives according to His commandments, living each and every moment loving others, forgiving others, showing compassion and mercy towards others, and dwelling here and now under the reign of God.