Will We Welcome Christ or Ask Him to Leave?

Source: Anchor
If we would meet Christ in all his power, would we welcome Him, or would we reject Him? Would we obey Him, or would we fear Him and ask Him to leave us alone?
Priest Luke A. Veronis | 26 October 2020 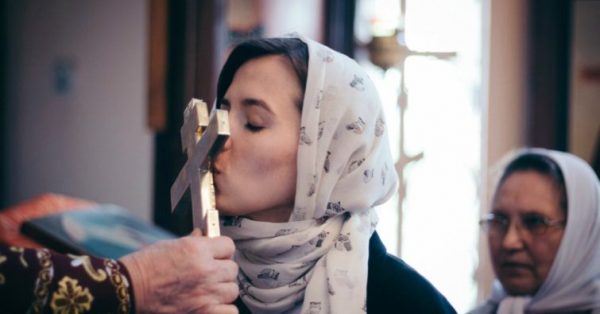 It seems like it should be a pretty simple question to answer, and yet, is it? Think about if we could meet Christ in all His power, would we welcome Him, or would we reject Him? Would we obey Him, or would we fear Him and ask Him to leave us alone?

We see these two very different responses in today’s Gospel story, where Jesus encounters a man filled with a legion of demons. The demons were fearsome and destructive. They diabolically possessed a man until he became helpless under their satanic sway. Scriptures describes how the poor man lost his entire identity to these demons, no longer knowing even his own name but calling himself Legion, leaving society as he gave in to these evil spirits of his souls. They strip him of his dignity and guide him to live naked among the tombs of the dead. He represented a pathetic, broken, basically dead soul with whom society had given up on and forgotten about.

Yet, when Jesus encounters this fierce legion of demons, they become powerless before Christ’s divine authority. At the end of His life, Jesus stated to His followers, “All authority in heaven and on earth have been given to me.” And He displayed “all authority” when He confronted the legion of demons and commanded them to come out of the poor man. He cast them out of this poor man’s soul and mind and commanded them to never enter him again. These demons, no matter how powerful and fearsome they appeared while destroying this man’s life, became impotent before Christ. Their fierce, demonic power could not compete with the might of Jesus Christ.

So, the demons timidly listened to Jesus, submissively asked permission to leave the man’s soul and to enter the dirty swine nearby. We see the fearsome demons obey Christ, as we see the man delivered from evil, restored to health, recovering his identity as a child of God and as someone created in God’s image.

What happens next, though, is fascinating! We see a completely different reaction to Christ’s power and authority when the villagers all hear about this miracle and come out to meet Jesus. Maybe out of curiosity, maybe from the testimony of the swine herders, but probably because the villagers just lost their livelihood and income when the herd of swine ran into the lake and drown, out came all the villagers to meet this Exorcist.

What had transpired, they wondered. How did all of this come about? Who was this man Jesus? And how is it possible that the man all of the village had given up on, the man so destroyed by the legion of demons that he lived among the tombs, was now sitting at the feet of Jesus in His right mind?!

Well, Jesus displayed His authority and power over all evil, yet the villagers didn’t understand. Or they didn’t want to understand. For this display of power, did they welcome Christ and invite Him to stay with them? Did they rejoice that the demon-possessed man found freedom, healing and new life? Did they ask Jesus if He would free them also from whatever demons dominated their own lives? No, not any of that! The villagers instead responded with fear. They were so confused and upset that Jesus interfered and interrupted their lives, that they asked Him to leave their region. Can you imagine? After witnessing an unbelievable miracle and experiencing His power, the villagers want nothing to do with Christ. They basically rejected Him.

The legion of demons, even with all their strength and fearsome power, recognized Jesus’ authority and obeyed Him. The demon-possessed man freed from his darkness and healed from his brokenness welcomed Christ and discovered a new life. The people of the village, however, experienced Jesus’ authority and became afraid. They wanted nothing to do with Him. He disturbed their lives too much. Thus, they asked him to leave.

This unusual story with its surprise ending leads us, here today, to reflect upon how we respond to the authority and power of Jesus Christ in our own lives? Do we welcome Him or do we keep Him at a distance, not wanting Him to confront the demons in our own lives and not allowing Him to get intimately involved in our everyday affairs? Do we outright reject Him, refusing the change and transformation that He inevitably brings?

C. S. Lewis, one of the most famous Christian apologists of last century and a former Professor from Oxford University, himself an atheist for the first 30 years of his life, described his rejection of Christ in this way. Jesus is the Great Interferer! And people don’t want Him to interfere in their lives!

Lewis admitted that as an atheist, he didn’t want God to exist. His pride led him to hold on to a terrible prejudice against any faith issues, keeping himself from sincerely and honestly searching for Truth. He wanted to be left alone, and unconsciously knew that if he denied the existence of some Ultimate Authority, then he himself would act as that very authority in his own life. He could then live his life according to his own desires. This arrogant self-deception describes life for many people who want to hold on to their egocentric ways. If we believe there is no God and no absolute truth, then there can’t be any unchangeable standard of good and evil; everything depends on me, and on what I make the standard out to be.

C.S. Lewis admitted that only when he finally decided to open his mind and examine the evidence in an unbiased manner, did his pride allow the “Great Interferer,” as he called God, to fully enter his life. And God did indeed interfere in his life with power, but in a most beautiful way. Lewis’ life radically changed for the better, as he himself described – with joy and meaning and purpose. Lewis went on to become one of last century’s greatest Christian writers and witnesses of the faith. He allowed the Great Interferer to interfere in his life, and he was never the same afterwards!

So, what about us? How will we respond to Jesus Christ and His authority and power in our lives? Will we obey Him? We will welcome Him and invite Him to confront the demons in our own lives and allow Him to deliver us from their power? Or will we ask Him to leave us alone, to demand that He not interfere with our lives and just stay the way we are?

God respects our freedom. We have choices to make. And one of the most important choices is how we will respond to Christ’s power and authority.

The Joy of Giving and Serving Others

Jesus Christ once said, “It is more blessed to give than to receive.” Some may raise their eyebrows at such…

Janet Hourihan Brooks is an amazing woman. She is the mother of one of my son’s best friends.…