Wolves Will Always Attack the Church – That’s Why Christ Prayed 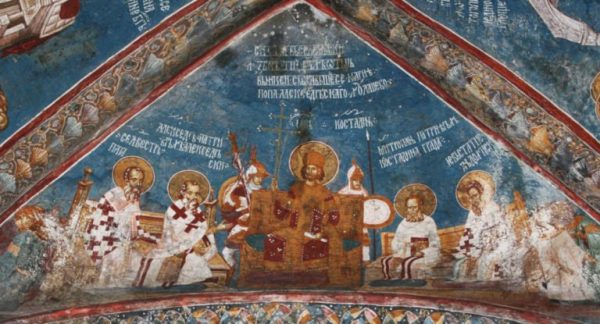 The Church sets aside this Sunday to remember the First Council of the Church – the Council of Nicea.

This day marks that great event when the whole Church came together to condemn the false teachings of the priest Arius.

This is the day the Church first stated in writing the true faith of Orthodox Christianity in the words of the Nicene Creed.

And each year on this day we read the same words from the Gospel – the Lord’s very last words before He is arrested, to be taken to suffer and die on the Cross.

And He knows it is not going to be a rosy picture.

Christ prays to God the Father, that He would glorify Him with the glory that He had before the world was made – and God the Father did that, of course.

Except Saint John Chrysostom tells us that the path Christ followed to the glory of the Father ended up being through suffering on the Cross.

The world in which Christ was leaving the Church was not going to be any different.

Saint Paul says that after he is gone, grievous wolves will enter into the Church, not sparing the flock. He’s not talking just about those who attack the Church from outside – Saint Paul is talking about those inside the Orthodox Church who will actually do things to harm the Church, and to harm other Orthodox Christians.

That’s the way it was at the time of Christ and Saint Paul.

That’s the way it was at the time of the First Council of the Church.

That’s the way it is today.

Life in the historic Church – the Body of Christ – will always be a mess. That’s the reason Christ was praying for those in the Church – it’s the reason He said these words in the Gospel.

If life inside the Church was going to be seamless, unchallenged by falsehood, cowards, heresies, mistakes, and betrayals — why would Christ need to say all this?  He is praying for us because we are going to need God’s help in hostile territory.

We shouldn’t get discouraged when we see false teachings inside the Church.

They have always attacked Her.

Why would the evil one bother attacking anywhere else?

Why would he bother the Jehovah’s Witnesses? They already teach false things!

No – Christ prays that the Father will give life to the faithful.

He prays that the Father will give them eternal life through Communion of the Eucharist, Saint Cyril says.

He prays that He will return us to the state Adam had with God, before the fall of mankind. Saint Ephraim the Syrian says.

Christ prays this way – in His final prayer on earth for His Church – because He knows that life in the Church is not going to be a neatly organized, spiritually sanitized experience…

It is going to be a war.

And because He loved us – even before we were born – Christ prays that we will be prepared and protected to endure life in this world.

Saint Hilary of Poitiers says, Christ does it for us in the same way He allows His disciples to sleep in the Garden of Gethsemane, even though He knows danger is approaching.

Danger is here, brothers and sisters – danger for us, and danger for the Church.

This danger has existed since the time of the Fall of Mankind.

It is the very reason Christ came into the world to save sinners.

It is the very reason that Christ died and rose again, and gives us the power of His Cross, His Body and Blood, His saints, and their prayers and incorrupt relics, as a sign of the general resurrection of mankind.

It is the very reason the Lord Jesus Christ has done everything to take care of His faithful since the very beginning: because He knows the world is a mess.

Just like the Lord, Saint Paul also poured out his life for the faithful in the Church.

He laboured very, very carefully to ensure he taught them and formed them in the true faith and understanding of Christ, because if he failed to do so (Saint John Chrysostom warns), he would be held liable for innocent blood.  The lost souls of faithful people.

Saint Paul says this: I ceased not to warn you day and night, with tears.

That’s what the apostles all tried to do.

That’s what the Fathers of the Council tried to do.

That’s what any conscientious priest or bishop today will try to do.

Tell the truth about Christ. Warn people about falsehood.

Brothers and sisters, we should never be scandalized when we see or hear something going on in the Orthodox Church that sounds like a disaster.

From the very beginning, the apostles abandoned Christ, and one of them betrayed Christ.

People broke into factions, and formed their own schisms.

Groups taught falsehoods, these groups gained popularity, and it sometimes took centuries to solve filthy scandals in the Church.

Sometimes, whole generations lived and died, having to endure them.

They are nothing new.

So if you see them, you can simply say with King Solomon, there is nothing new under the sun.

But never be discouraged, brethren:

Like a great ocean, the Church purifies itself against whatever falsehood is poured into it.

Through suffering, the faith of whole nations and individuals is purified, and made strong.

And throughout it all, Christ’s original words – I pray for them, Holy Father: Keep through thy name those whom thou hast given me – are echoed again and again in every century.

They are echoed in the prayers of His saints in every land and time.

They are echoed in the prayers of every right-believing priest and bishop.

And they are echoed every time you join your prayers to theirs, in your home, before your icons.

Because the Lord knew it would get hard. And He does not abandon us.