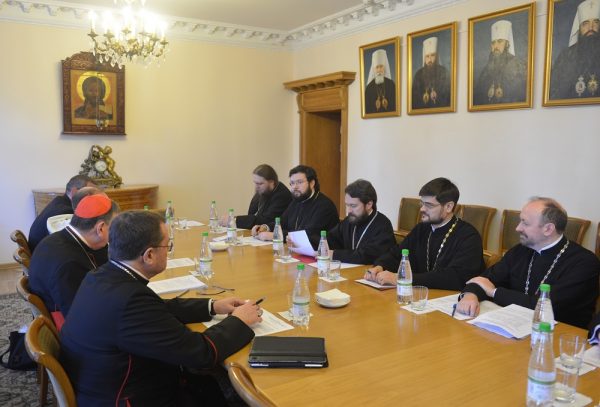 The meeting was also attended by D. Mayakov, administrator of the Moscow Synodal Choir, and I. Lapshin, director of the St. Gregory the Theologian Charity.

Opening the meeting, Metropolitan Hilarion noted that it was already a third meeting of the Joint Working Group for cultural cooperation between the Russian Orthodox Church and the Roman Catholic Church since its establishment in 2015. For the past period, the Working Group proved its high effectiveness in organizing and conducting joint cultural events in both Russia and Italy, which promote deeper knowledge of Eastern and Western traditions and mutual understanding between Orthodox and Catholic Christians.

The meeting summed up the work carried by the Working Group last year and considered several new projects to be realized in the period between 2017 and early 2018, including concerts of spiritual and classical music, art and subject expositions, publishing of books by Patriarch Kirill and Pope Emeritus Benedict XVI in Italian and Russian, as well as students’ exchanges.