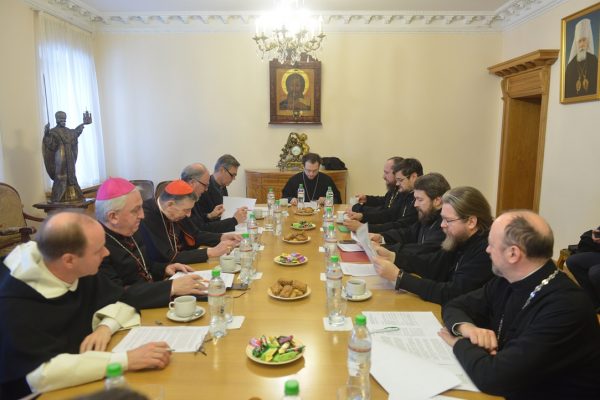 On 13 February 2019, an annual session of the Joint Working Group for Cultural Cooperation between the Russian Orthodox Church and the Roman Catholic Church took place at the Department for External Church Relations of the Moscow Patriarchate.

As Metropolitan Hilarion noted, opening the session, this year the Joint Working Group for Cultural Cooperation between the Russian Orthodox Church and the Roman Catholic Church holds its fifth meeting since its establishment in 2015. Over these years the working group demonstrated its efficiency in organizing various joint cultural events both in Russia and in Italy, helping people learn more about the spiritual traditions of the Churches of the East and the West and promoting mutual understanding between the Orthodox and Catholic Christians.

The participants in the session summed up the working group’s activities for the past year and discussed a number of new projects due to be carried out in 2019 and early 2020, such as concerts of religious music, exhibitions, joint conferences, presentations of books and the annual Summer Institute.