21 Egyptian Christians beheaded by IS in Libya, Sisi warns of response to terrorism

Source: Global Times
Natalya Mihailova | 16 February 2015
The Islamic State (IS) group in Libya released a video on Sunday purportedly showing the beheading of 21 Egyptian Christians, which enraged President Abdel Fattah al-Sisi who warned of response to the deaths when appropriate. 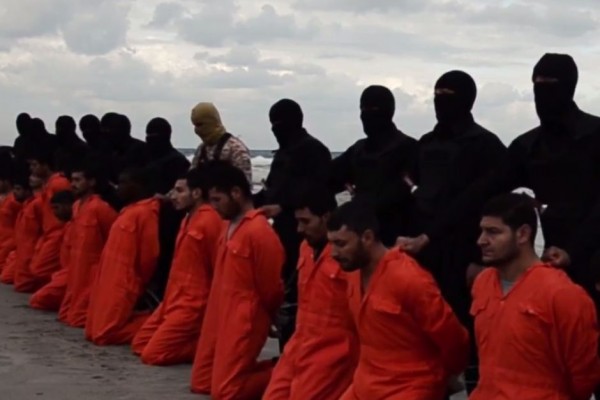 In the video, the victims — Egyptian Coptic Christians abducted in Libya dressed in orange — were lined up near the seashore and forced to kneel on the ground.

“People of the cross, followers of the hostile Egyptian church,” a caption read on the five-minute video, entitled “A message signed with blood to the nation of the cross.”

Later on Sunday, the Egyptian Orthodox Church confirmed the killings. “We watched the painful video. We can confirm the slain were our kidnapped sons in Libya,” spokesman for the Coptic Orthodox Church in Egypt, Polis Halim, was quoted by the state-run MENA news agency as saying.

The spokesman said the Church is in contact with a number of government institutions to follow up on the situation.

The Egyptians were abducted in Libya’s central city of Sirte on two separate occasions in December and January, only one week apart.

Sisi delivered a televised speech hours after the release of the video, saying that “Egypt reserves the right to respond in a suitable way and time to punish these murderers.”

Egypt is able to defeat terrorism because it “is defending humanity,” and these cowardly actions will not undermine its determination, Sisi said.

“Egypt and the whole world are in a fierce battle with extremist groups carrying extremist ideology and sharing the same goals,” he said with visible anger on his face, adding that “We all need to be united to fight terrorism.”

Sisi also declared a seven-day mourning over the death of the victims and ordered an emergency meeting of the National Defense Council, urging the government to move swiftly to assist the victims’ families.

The president also said he had ordered the government to enforce a travel ban on Libya.

Thousands of Egyptians have traveled to Libya to look for jobs since an uprising in 2011, despite the government’s advice not to go to the lawless country.

The beheadings could strengthen Sisi’s determination to deal with security threats from militants thriving in neighboring Libya.

The IS has been bombed by US and partner-nation military forces in Syria and Iraq. In retaliation, the militant group has murdered five Western hostages, two Japanese and a Jordanian pilot since August last year.

Egypt has denied reports that it had taken part in the US-led air strikes against IS targets in Syria and Iraq. However, US officials said its ally, the United Arab Emirates, carried out strikes using Egyptian bases.

This is the first time the IS has released an official video showing such killings outside the territories it controls in Syria and Iraq.

With Libya caught in a chaotic power struggle between two rival factions operating the country, Western officials worry the IS is taking advantage of the turmoil to strengthen their presence there.

“Libya has the same features of potentially becoming as bad as what we are seeing in Iraq and Syria,” UN special envoy to Libya Bernardino Leon told media.