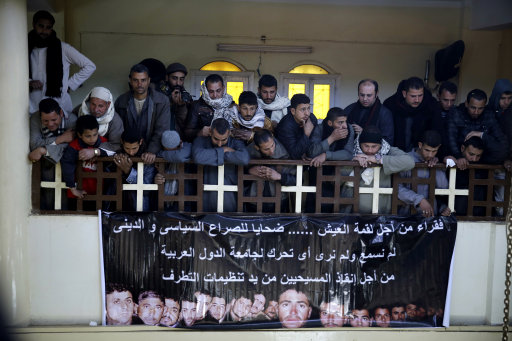 Mourners commemorate the Christian martyrs inside the Virgin Mary Church in the village of el-Aour, near Minya (AP Photo/Hassan Ammar)

A church dedicated to Christians who were murdered by militants allied to ISIS is to be built in Egypt.

Twenty-one martyrs were beheaded on a beach in Libya in February. Work began on the foundations of the new church in the Coptic Orthodox Diocese of Samalout earlier this year.

Bishop Paphnutius of Samalout said: “We are extremely proud of our martyrs. Although they were forced to kneel before their executioners, they were the stronger. Their murderers were the weaker, despite their weapons. Why would they have concealed their faces otherwise? It could only have been because they were afraid. Our sons by contrast were very strong and called on our Lord until their very last breath.”

Bishop Paphnutius continued: “The Church has always known that the blood of martyrs is the seed of faith. It will remain so until the end of time. From Alexandria to Aswan, throughout Egypt, Christians have been strengthened in their faith. Muslims from all over have also told us that they are proud; they say that our martyrs have shown that we Egyptians are very strong. Their death fills all of us, Christians and Muslims alike, with pride.”

The project had been authorised directly by Egyptian President Abdel Fattah el-Sisi shortly after the massacre but local Muslim authorities resisted the plans, causing delays to construction.

The daughter of one of the martyrs, thought to be no more than six years old, said: “I am proud of my father, not just for my own sake, but because he has honoured the whole Church. He did not deny his faith. That is something wonderful. We pray for the perpetrators, that they may be converted.”

Twenty Egyptians and one Ghanaian were killed by ISIS-allied militants in February. Video footage released online showed a group wearing orange overalls being forced to the ground and then decapitated.