Are They Burning the Bible in China? 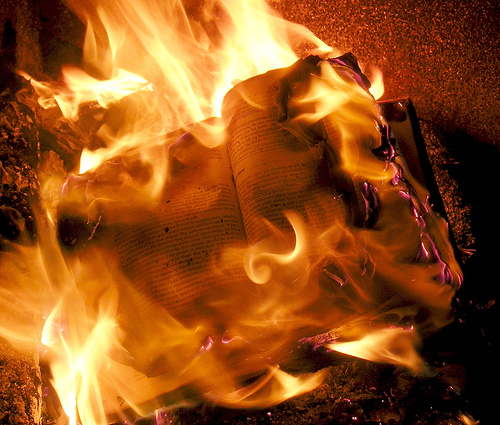 Writing for the AP (9/10/18), Christopher Bodeen notes, “China’s government is ratcheting up a crackdown on Christian congregations in Beijing and several provinces, destroying crosses, burning bibles, shutting churches and ordering followers to sign papers renouncing their faith, according to pastors and a group that monitors religion in China.”

Bob Fu of China Aid, a group in the U.S. that works to help the church in China, said, “The international community should be alarmed and outraged for this blatant violation of freedom of religion and belief.”

Bodeen writes that the Chinese government is reportedly “demanding loyalty to the officially atheist Communist Party and eliminating any challenge to its power over people’s lives.”

And he adds that the President Xi Jinping is like a new Mao Zedong: “Xi is waging the most severe systematic suppression of Christianity in the country since religious freedom was written into the Chinese constitution in 1982.”

The unregulated “house churches” are particular targets of Chinese Communist persecution. The ultimate issue is one of control.

Despite the crackdown by the Communist government in China, the church appears to be growing. If the present trends continue, China is projected to be the country with the greatest number of Christians worldwide.

Most viewed articles
Seven Lessons for the New Year from St. Seraphim of Sarov234
A Great Time to Join the Orthodox Church151
New Jersey Governor Signs Bill Legalizing Abortion Up To Moment of Birth102
The Way of Christ Is The Way of Love70
Metropolitan Hilarion Celebrates the 20th Anniversary of His Episcopal Consecration56
Metropolitan Hilarion: the Church and traditional confessions have done everything possible to improve the situation in Kazakhstan38
Brooklyn Street Co-Named for Antiochian Pastor Who Served a Half Century There38
4-400×6001
Sunday of the Samaritan Woman1
How We Worship: the Struggle of the American Experience1
Most popular authors
Priest Luke A. Veronis234
Frederica Matthewes-Green151
Ryan Foley102
Pravmir.com team94
Fr. Theodore Stylianopoulos70
Peter Samore38