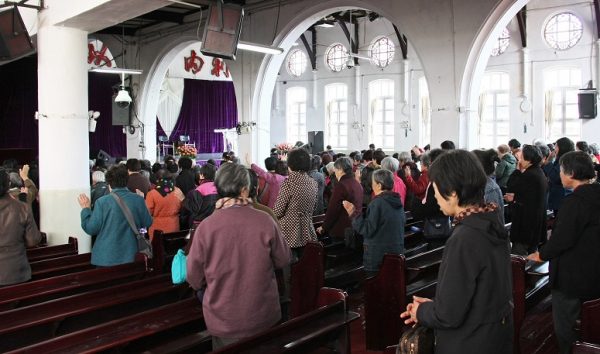 China, October 25 – China may finally be making the move to re-write the Bible.

Bob Fu, founder of China Aid, a persecution watchdog group, raised the alarm this month in an address to members of the US government. According to him, the Three Self Patriotic Movement and the Chinese Christian Council are working on a five-year plan to infuse Christianity with elements that cultivate socialist core values, a move deemed to make Christianity more ‘Chinese’.

These could include a summary of the Old Testament with some Buddhist scripture and Confucian teachings and new commentary for the New Testament, as well as adding certain elements into worship songs.

Open Doors USA’s president and CEO, Dr. David Curry calls it an issue of control (the term “sinicize”).  The reason?  The number of Christians numbers in the millions and continues to grow, and the  Communist Party is banking on a unified Chinese cultural identity to maintain its power.

What it means, he explains, is that there will be even more pressure on the Body of Christ in China.

”They are trying to force out unregistered churches. Those churches that are registered, they approve sermons, these kinds of things, slowly turning up the heat and making it a ‘Chinese’ church, not a Church of Jesus. That’s their concept, anyway. What will happen practically, as this plays out, is yet to be (determined).”

It’s a crackdown that’s spreading throughout the country. The concern is that Xi Jinping has stoked nationalism and promoted loyalty to the Communist Party in ways similar to the lead up to the Cultural Revolution.

China’s new religion law, along with the implementation of the sinicization of Christianity means that “everybody who is a Christian is likely to face some increased pressures in China. They’ve always been monitoring underground churches; now, this seems like they’re moving toward forcing them out.”

Already, Fu says state officials are pressuring 20,000 underground house churches to close and join the state-sanctioned church; their leaders, forced to pledge their loyalty to the Communist party.

Curry isn’t surprised. “Governments like to do this sort of thing. What is important is that the Church remain fully followers of Jesus, not first, citizens of some country here, but first, kingdom citizens and follow the Scriptures, as they are written, and abide by that.”

A ‘Chinese’ church, or a Body of Christ that is Chinese?

As more and more churches come under fire, pastors are joining a growing chorus of protest to the government over the restrictions on Christianity,move with which Curry agrees is necessary.

“The Church in China needs to move out of the passive zone and  be actively integrating their faith into every part of their walk in China, including standing up if the Chinese government decides it wants to ‘edit’ the Bible.”

As this becomes a reality, Curry says the rest of the body can’t just be bystanders, anymore. “I think we have to call it out. I think it’s an issue of prayer and letting people know in the global community, that we’re aware.”

He urges prayer for the grace, patience and steadfast faith of the Christians in China. Pray also that they will not succumb to fear.

Finally, he says, don’t keep the stories to yourself.  Share these stories with your community.

“Whenever Christians are persecuted, we need to stand up and let our voice be heard.”

Most viewed articles
How Often Do We Come to Church and Worship God?123
Using Boredom to Cultivate the Soul111
Patriarch Kirill’s Sermon on Holy Pentecost87
Holy Pentecost Celebrated at Kiev-Pechersk Lavra64
The Feast of Pentecost Celebrated at the Patriarchate of Jerusalem46
Patriarch Kirill Congratulates Metropolitan Onuphry on the 50th Anniversary of His Ordination45
Flying By The Instruments38
Patriarch Daniel: The Church Is Not Founded by Human Agreement. It Is the Extension of Christ’s Life25
Patriarch Kirill: “Amazing Unity of Our People Occurred During Great Patriotic War”17
Sunday of St. John of the Ladder – One Step Short of Paradise1
Most popular authors
Pravmir.com team172
Priest Luke A. Veronis123
Eric Hyde111
Patriarch Kirill of Moscow and All Russia87
Archpriest Lawrence Farley38
Aurelian Iftimiu25