A Historical Day for the Serbian Armed Forces

Source: Serbian Orthodox Church
Natalya Mihailova | 10 May 2018
After the introduction of religious service into the Army of Serbia, the General Staff of the Serbian Armed Forces celebrated on 6 May 2018, for the first time, its Patron Saint-day (slava), the Holy Great-martyr George 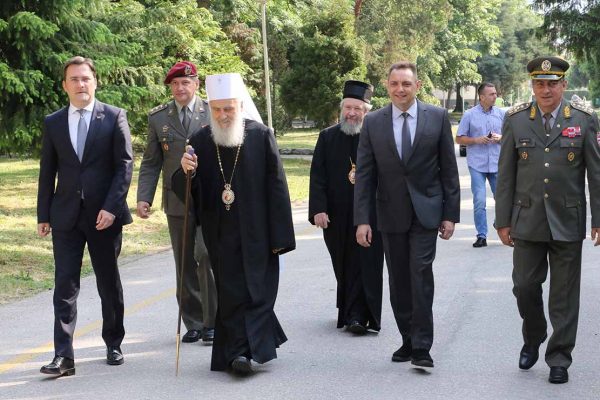 His Holiness Irinej, Serbian Patriarch, celebrated the Holy Hierarchal Liturgy. He was concelebrated by mayor Revd. Sladjan Vlajic, the chief priest of the Serbian Armed Forces, and Captain Revd. Djordje Dimic, military chaplain at the Command of the Serbian Army; military chaplains Mayor Revd.  Nemanja Petrovic from the Military Academy, Captain Sasa Sovilj from the Military Medical Academy, Captain Djordje Stojisavljevic from the 1st Brigade of the Serbian Army and Captain Selimir Vagic from the River Flotilla; as well as by protodeacon Stevan Rapajic and deacon Dragan Tanasijevic. The choir Mojsije Popovic sang responses.

At the end of the Liturgy, Serbian Patriarch Irinej blessed slava cake and broke it with the host, General Ljubisa Dikovic and other guests.