Abraham, the Righteous, and the Prayers of Our Holy Fathers 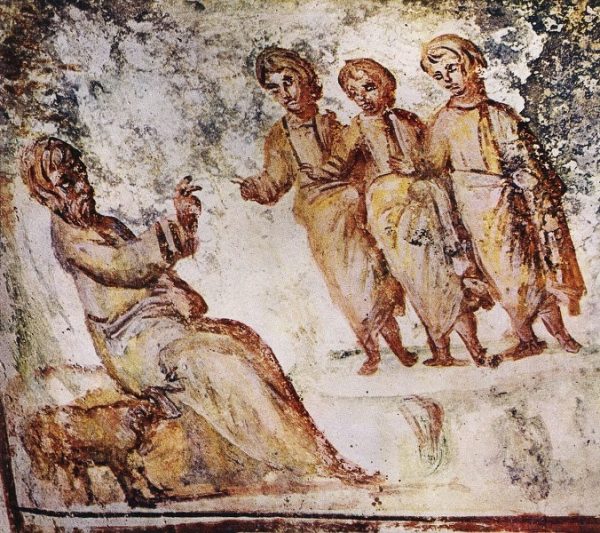 Many services of the Church conclude with this prayer: “Through the prayers of our Holy Fathers, O Lord Jesus Christ, have mercy on us and save us!” Since we ourselves are praying directly to Christ, why do we invoke the prayers of others? Are our prayers so weak, or is His mercy so hard to come by? Like so much else in the Church, the answer reveals an even greater mystery.

In Genesis 18, we are told about God’s visit with Abraham beneath the Oak of Mamre. The short passage is filled with mysteries and has drawn the attention of the Church for centuries. God has determined to destroy Sodom and Gomorrah if their wickedness turns out to be as reported. Abraham, however, poses an interesting question in his intercession for the cities. Will God destroy the righteous (tzadikim) with the wicked? What if there are 50 righteous persons in the city? Would God spare the cities for the sake of the 50?

God responds that He will spare the cities for the sake of 50 righteous. Abraham’s intercession continues with extended “bargaining.” It concludes with the “concession” that a mere 10 righteous would be enough for which to spare the cities. Of course, it turns out that there are only 8 righteous, and the cities are destroyed, though the 8 souls are evacuated (Lot and his extended family).

It is, however, a principle of note that is revealed: the presence of the righteous preserves the lives of the unrighteous. They are salt and light. As St. James says, “The fervent prayer of the righteous avails much.” (5:16)

The presence of but 10 righteous ones would have saved the cities of Sodom and Gomorrah, symbols of the greatest wickedness throughout time. Even more than that were the prayers of Abraham. For the period of time in which he stood before the face of the Lord and argued, the wicked cities were spared. He “delayed” the hand of God.

This sense of things has largely been lost in our present world. We have nurtured a secular mentality among ourselves and have come to see the presence of Christians in secular terms. We number ourselves among the various “interest groups.” We imagine that if we stand with a united voice, a united vote, and united wealth, we will have some measure of impact on the decisions of the mighty (who are, decidedly, not gods). The very sad conclusions of secularism are that this world is self-governing, self-existing, and self-determining. It is a line of thought that actually has no need of God.

The rise of secularism as a dominant cultural belief carries with it the rise of “morality” as an engine of power. The “moral” social movements that have marked the modern history of Christianity in the West (Puritanism, abolition, feminism, prohibition, as well as modern wokism, and others) are all examples of Christianity as a secularized, “moral” power. The fact that these movements have often had as much non-Christian participation as Christian points to the secular nature of their existence. As movements, they work just as well whether Christians join them or not. Secularism prepares the world for the disappearance of Christianity.

Several years back, speaking at a conference in Seattle, I described that city as “among the most moral places in the nation.” Whole areas of that city have been shut down, from time to time, in the name of various moral causes. Boston, during the Puritan era, was less moral. Unsurprisingly, NPR, a few years back, did an article saying, “Don’t believe in God? Move to Seattle.” It does not make it less moral. Indeed, it might make it moreso.

I apologize to my friends in Seattle – I could have used other cities as examples. It’s not just Seattle.

Christ taught that the Church is “salt” and “light.” For many, this is a commandment that propels us into the moral battles of every place and time. Christ noted that if salt that has lost its “saltiness,” it is only fit to be thrown away. He could equally have said that meat that has become “all salt” is inedible.

The imagery of salt is not one that suggests the conversion of the world to all salt. Nor is the image of light generally one that suggests that all will become light. Both images suggest the nature of a righteous and holy presence in the world. Abraham beneath the Oaks of Mamre is the image of faith – not a vast army riding to crush its enemies and enthrone Abraham as the father of us all.

The single most important actions in the life of this world, on any given day, are found in the various places where the people of God have gathered and the Divine Liturgy is being offered “on behalf of all and for all.” Our modern sensibilities have oftentimes reduced the Liturgy to a “filling station,” providing us with energy and inspiration so that we can go out into the world and do “our real work.” These are two competing visions – and the first one – the ancient one – is increasingly ignored in its proper role.

If we understood the true nature of prayer – our communion with God – we would find every possible occasion to pray. When we enter into prayer in the presence of God, we take our place among the righteous. We become God’s salt and God’s light.

It was said in one of the early centuries of the Church that there were three righteous men through whose prayers God sustained the world in existence. We know for a fact, that the existence of Sodom and Gomorrah once depended for a time on the prayers of Abraham. I have a deep confidence that there are at least three who fulfill that role at this time. Every time we stand in prayer, we take our places beside them. There, we become salt and light, no matter the politics and moralities of this world.

Through the prayers of our holy fathers, O Lord Jesus Christ, have mercy on us and save us!