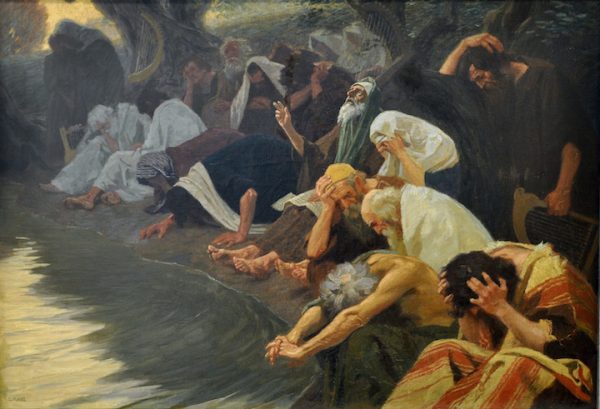 Image: By the Rivers of Babylon (An den Wassern Babylons) by Gebhard Fugel, 1920 [Städtische Galerie Fähre, Bad Saulgau, Germany]. The reference is to Psalms 137:1: “By the rivers of Babylon, there we sat down, yea, we wept, when we remembered Zion.”

My newsfeed must be set for “shock.” Never does a day go by that there is no something outlandishly alarming featured as a story, somewhere, illustrating the insane march of modern culture. Much of me would like to think that the problem is in the newsfeed and not in the culture itself. However, on a basis that is frequent enough to be alarming in itself, I find something in my daily experience that confirms the insanity in my newsfeed. I can only conclude that the world is getting stranger by the day.

I recently saw a story that proclaimed God to be “queer,” as if that were news. The extremes of gender studies have been buzzing around religion departments long before the concepts were even hinted at in mainstream America. Of course, the most amusing part of such notions is that the very departments that now anoint God as the ultimate version of their ideology, are the same departments that would have been embarrassed to admit that there even was a God just a few decades before. Mainstream denominational Protestantism, in danger of losing all belief, has recently found something to believe in, and does so with all the fervor of a new convert.

The Unitarian Church down the street from my parish has a lighted message board for the passing traffic. Mounted atop an obligatory rainbow, it oozes slogans daily that invite people to come and experience the new God they have found.

The conversion of God to the new cultural beliefs is not terribly surprising. Modernity is an inherently religious project. It is highly “secular” only in a very refined meaning of the term. But, more than that, it believes in secularism. This is only one of many inner contradictions within the modern project. It is thoroughly committed to the creation of a better world, while holding to philosophies that would deny the ability to actually define “better.” It is this emptiness that I suspect has given rise to the new piety. 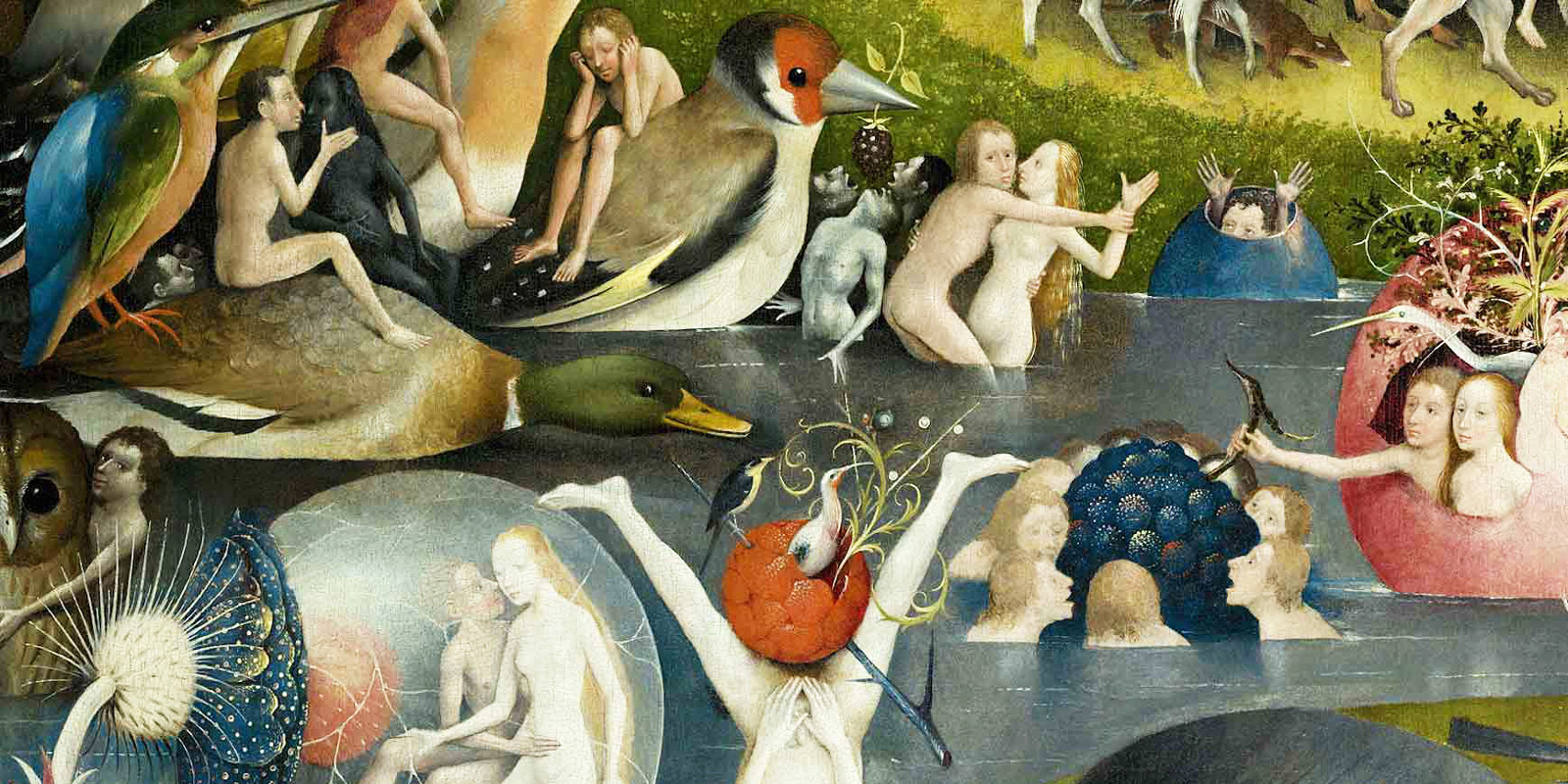 At the heart of modernity is the belief that we can dominate nature and shape the outcomes of history to our liking. It is the placing of the human “will” at the center of all things. It is important to understand that this fundamental orientation towards creation can play both sides of the street. In America, both liberal and conservative religion are captives to modernity as they are locked in a mutual struggle of their opposing wills.

“Democracy” is one of the sacraments of modernity. It is treated as a primary means of grace in history. Political action organizes the human “will” for projects of “goodness.” What constitutes the “good” varies with each ideology. Both sides fail to see that they are arguing in a mirror where all images are reversed. Both believe in power.

It is important to understand that if every goodness intended by God were to be lawfully imposed on the world by some form of authority, the world would not be a better place. It would only be as lawful as it is now. Christ did not die to create a more lawful world (one already existed). He came to raise the world from the dead. A more lawful corpse is still a corpse.

Modernity is itself the death throes of a civilization committed to rebellion and domination. It moves from one madness to another. It cures diseases and raises the dead only to watch the rise of greater diseases and new forms of death in a whack-a-mole game of tragic futility.

The Kingdom of God only exists in Christ, with Christ and through Christ. And, lest this be seen as yet another religious imposition from above, this same Christ is none other than the Logos within all creation, who reveals the truth of each thing and everything. Life in union with Christ is also life in union with our true selves (and one another). It is life in union with every particle of the created universe. It is the life that gathers all things together in one, in Christ Jesus, into the glorious liberty of the children of God.

The French philosopher Voltaire said, “With great power comes great responsibility” (a phrase made famous these days in a Spiderman movie). We observe this in many obvious ways. We do not put a three-year old in charge of the family cooking – the heat of the stove is too much power at that age. We do not license ten-year-old’s to drive cars for the same reason. The technology of the modern world represents the most wide-spread harnessing of power in human history. It is tragically met by a culture whose spiritual and moral maturity are at a low ebb.

Human wars were initially fought with primitive weapons of brute force. Their brutality was face-to-face and, as such, presented a spiritual and emotional challenge to every warrior and his society. “War is hell” (Sherman’s dictum) is an apt description, drawn from experience. Modern war often deals in abstractions. Rockets, bombs and drones allow massive killing at a distance. The Global War on Terror has seen a casualty ratio of nearly 100:1. Modernity is an efficient war machine. Those deaths happen at such a remove that the general population has no awareness of them at all.

Abortion is discussed as a moral abstraction. According to the World Health Organization, 40-50 million abortions take place every year in the world.  Two-percent of that number are in the United States. Such numbers are beyond comprehension.

Moral maturity requires a constant feedback from the consequences of our actions. Modernity creates moral infantilism. Indeed, most Americans have never witnessed a death, and increasingly avoid its reality, even in funerals (now becoming “celebrations of life”). As such, we are morally incompetent to formulate opinions in matters of consequence (we are deeply shielded from too many consequences).

In the course of writing this post, a series of articles began appearing in the New York Times extolling abortion and vilifying its opponents. I was doing my best to ignore it as a noisy distraction. However, today, an article appeared, written by a woman abortionist relating her experiences during her recent pregnancy and birth of her child. She did not shy away from the contradictions and cognitive dissonance that would inevitably arise in those circumstances. However, she offered a summary that was chilling in the extreme:

As a doctor, I can draw a distinction, a boundary, between a fetus and a baby. When I became a mother, I learned that there are no boundaries, really. The moment you become a mother, the moment another heartbeat flickers inside of you, all boundaries fall away.

Nevertheless, as mothers, we must all make choices. And we must live with the choices that aren’t ours to make. We can try to compartmentalize. We can try to keep things tidy and acceptable. But in reality, everything is messy: the work of doctors, the work of mothers, and the love of each one of us for our children.

And yet somebody has to do the work.

There are no arguments that could possibly counter such a statement. This is the confession of a modern heart. Even when all of nature is shouting the truth, “somebody has to do the work.” Be still, my heart, I have work to do.

The article served as a reminder of the character of our world. The battle is in the human heart. There are no external solutions to the madness of modernity. Such madness has always been around. Sometimes it has coalesced around moral causes of which we would likely approve. That might be a still greater danger.

The Fathers urge us to “guard the heart.” When we pray, it is right not to pray “at” those with whom we disagree. It is better to stand, somehow, within them (recognizing that their sin is yours as well), and from that place offer prayers to God. This is the work somebody has to do.

There is ultimately only ever one choice – to choose God. Understanding and seeing that as the choice before you is the grace of salvation. Lord, have mercy.

Most viewed articles
Patriarch Kirill: We In No Way Question the Healing Power of the Holy Mysteries of Christ!119
Hierarch from North Macedonia Gives Advice to the Ukrainian Orthodox Church114
On Feeling Forsaken114
Lessons from Saint Mary of Egypt108
Participating in God’s Vision102
Ethiopian Patriarch Thanks Patriarch Kirill For the Support During the Persecution93
Maronite Patriarch Thanks Russian Patriarch for His Support for Christians in the Middle East74
Representative of Russian Patriarch Delivers Rehabilitation Facilities to Children in Syria40
Sunday of the Samaritan Woman3
Food for the Journey1
Most popular authors
Pravmir.com team440
Archpriest John Moses (+2019)115
Justin Doty109
Priest Dustin Lyon102
Dcn. Michael Schlaack1