African King from Ivory Coast Baptized into the Orthodox Church 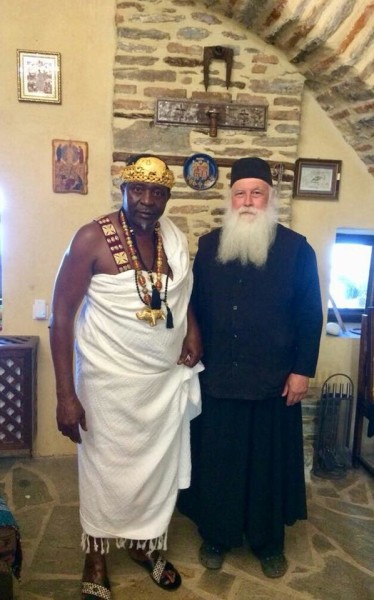 One of the African Kings from the Ivory Coast (Tribal King Tchiffi Zae Jean Gervais of the Krou chieftains in Côte d’Ivoire) was received into the Orthodox Church by the name David on 7/6/18. The King was baptized at the Holy Monastic Republic of Mount Athos. The King traveled to the Holy Mountain in Greece, and was baptized by the Orthodox monks.

King Tchiffi Zie Jean Gervais serves as the Permanent Secretary General of the Forum of Kings, Princes, Sheiks and Traditional Leaders of Africa, which was established in August 2008 in Benghazi, Libya, and is headquartered in Sirte, Libya, according to Afrika247.

He is also Prime Chancellor of the United Kingdoms of Africa, a “non-political, social development advocacy platform which functions in support of Presidency and National Government, institutions and peoples to support the National Development Plans.”