Ancient Orthodox Monastery of St. Thecla to be Restored in Syrian Maaloula 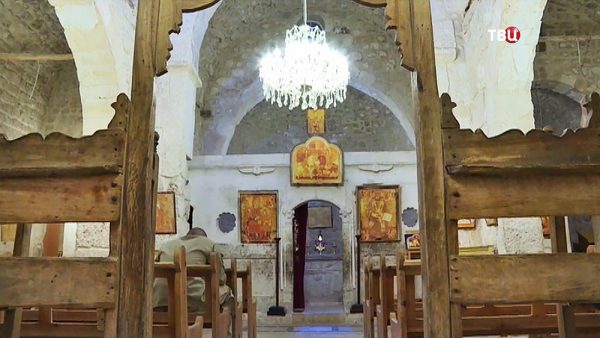 Moscow, May 29, Interfax – Orthodox monastery of St. Thecla in Maaloula (Damascus Governorate) destroyed in Syria by gunmen from illegal armed groups will be entirely restored during a month, clerics will start celebrating liturgies there, rector of the church Ilias Ades told the journalists.

“Everything was destroyed. We started restoring it. Today almost everything is ready. We only have to bring furniture to the cells, and in a month nuns will be able to get back to their monastery,” he said.

According to the priest, for such a small town as Maaloula it is very important to restore everything that has been destroyed as people here earn their living from tourists and pilgrims.

“Now you see: there are no tourists at all. So the things that are happening now, what we see today is a great happiness for residents of the town. And for the whole Syria. And I think that for the whole Christian world,” guide Olga Potapova said.

Two thirds of Maaloula residents are Christians of various confessions, services in local churches are conducted in Aramaic language which Jesus Christ spoke.

In December 2013 nuns of St. Thecla monastery were taken hostages by terrorists from Jabhat An-Nusra (banned in Russia). Three months later the nuns were exchanged for relatives of terrorists. In April 2014, the town was liberated by Syrian governmental troops. During the time when terrorists controlled the town, many Christian shrines were destroyed and desecrated there.