Anniversaries of Orthodoxy in Japan Marked in Tokyo 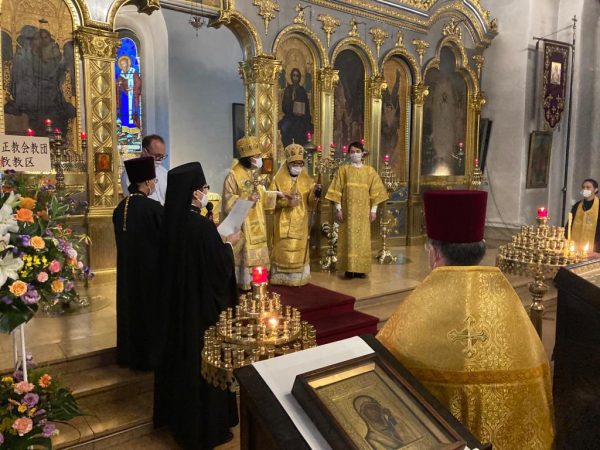 On September 12, the All-Night Vigil was celebrated at the Cathedral of Resurrection in Tokyo (known as Nikorai-do – the church of Nicholas dedicated to Nicholas of Japan Equal-to-the-Apostles, who brought Orthodoxy to Japan). It was led by Archbishop Seraphim of Sendai. He was assisted by Archpriest Nikolay Katsiuban, rector of the Russian Orthodox Church representation in Japan, as well as Rev. Michael Tainaka and Rev. Paul Nikanisi, clergy of the cathedral. Worshipping in the sanctuary was Archbishop Daniel, Archbishop of Tokyo and Metropolitan of All Japan.

On September 13, Metropolitan Daniel of Tokyo and All Japan, assisted by Archbishop Seraphim of Sendai celebrated the Divine Liturgy at the St. Nicholas Cathedral. They were assisted by Archpriest Nikolay Katsiuban, Archpriest Mark Koike, secretary of the Diocese of Sendai; Archpriest Paul Oikawa, rector of the Cathedral of the Annunciation; Archpriest Constantine Masuda, rector of the church of the Resurrection at Suginami City in Tokyo, and Rev. Michael Tainaka and Rev. Paul Nakanisi, priests of the cathedral. Due to the coronavirus epidemic restriction, there were about 70 worshippers in the church.

After the Divine Liturgy, a thanksgiving was celebrated and ‘Many Years’ was sung.

Metropolitan Daniel addressed himself to the congregation with anniversary greetings.

Archpriest Nikolay Kotsiuban read out a message sent by His Holiness Patriarch Kirill of Moscow and All Russia on the occasion of the festive divine services in Tokyo. Hieromonk Nicholas (Ono) of the ROC Tokyo representation read out the Japanese version of the Patriarchal message.

Mr. A. Bondarenko, a counsellor of the Russian Embassy in Tokyo, read out a massage of greetings from Russian Federation Ambassador to Japan M. Galuzin.

The Japanese Orthodox Church conveyed to Patriarch Kirill of Moscow and All Russia a vestment fabric made according to the old Japanese weaving tradition in Kyoto.

In the afternoon, Archbishop Seraphim of Sendai said a prayer at the tomb of St. Nicholas of Japan and the Office for the Dead was said at the graves of the late hierarchs of the Japanese Autonomous Orthodox Church. Archbishop Seraphim was assisted by Archpriest Nikolay Katsiuban, Rev. Michael Tainaka and Rev. Paul Nakanisi.

The festivities will be crowned by a visit of His Holiness Patriarch Kirill of Moscow and All Russia to Japan to take place when the epidemiological restrictions are lifted.