Consecration of the Romanian Orthodox Church in Tokyo 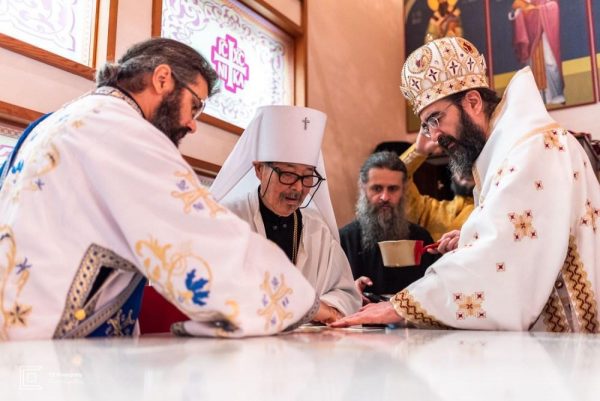 A Romanian Orthodox Church was consecrated in Tokyo on Tuesday, on the feast day of the transfer of St George’s relics to his church in Lydda. The service was officiated by Romanian Metropolitan Iosif of Western Europe and Metropolitan Daniel of Tokyo and Japan.

The consecration concluded the restoration works which took several years. The Romanian parish of Tokyo was established 12 years ago. In 2008, the Romanian Patriarchate sent, upon request from its faithful in Japan, priests Alexandru Nicodim and Cristian Gheorghiu to serve the community.

The consecration rewarded the efforts made by the faithful for the official recognition of the parish as a religious institution. The parish became a legal entity under Japanese law in August 2020.

In 1861, he was sent by the Russian Orthodox Church to Hakodate, Hokkaido, to serve at the chapel of the Russian Consulate.

Except for some short trips, Saint Nicholas remained in Japan even during the Russian-Japanese War (1904-1905) and spread Orthodoxy throughout the country. He was ordained as the first bishop of the Orthodox Church in Japan.

Saint Nicholas founded the Tokyo Cathedral in the Kanda district and spent over half of the century in the area. This made the faithful give the Lord’ Resurrection Cathedral the surname of Nikorai-Do.

Hieromonk Anatolie came to Japan in December 1871, while Father Nicholas’ activity was still focused in the Hakodate area, on the Island of Hokkaidō.

The Romanian was parish priest at the Orthodox church and missionary centre from Hakodate (1872-1878), professor at the Orthodox Theology Seminary in Japan (Surugadai Kanda, Tokyo), founder of the church in Osaka (1878), leader of the Russian Orthodox Mission in Japan (1879-1881), and principal of the Catechetical School in Osaka (1882-1889).

In 1880, Venerable Anatolie was raised to the rank of archimandrite. At the end of the 1880s, his health deteriorated and in the summer of 1890, he returned to Russia, where he reposed in the Lord on November 28, 1893.

When he first went to Japan, Venerable Anatolie only found 50 Orthodox Christians. When he left, there were more than 20,000.

Venerable Anatolie Tihai was a gifted polyglot: he spoke his native Romanian language, as well as Russian, Greek, Japanese, Bulgarian, English and ecclesial Slavic. He also had knowledge of French, German and Chinese.

He made many missionary trips throughout Japan and one to China (1888) and wrote two diaries. His first missionary diary was published in a bilingual Romanian-Japanese edition by the Romanian Orthodox Diocese of Bălţi in 2018, with the blessing of Bishop Antonie.