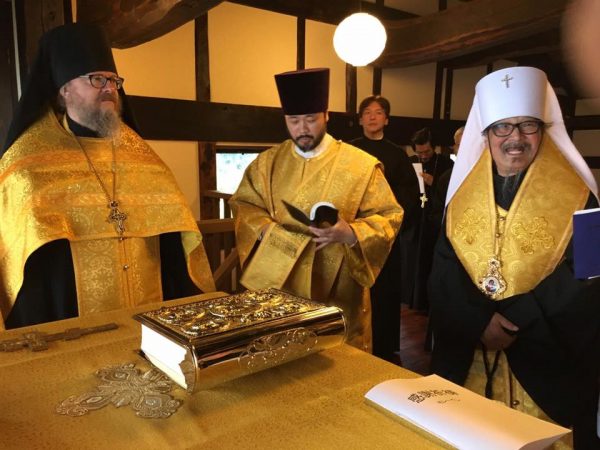 Land for the long-awaited Monastery of St. Nicholas of Japan was purchased in June this year in the south-central city of Ajiro, and on July 3, the brothers of the monastery served the first moleben on the site of the monastery’s future church.

Another joyous occasion in the life of the new monastery took place earlier this month, as the primate of the Japanese Church, His Eminence Metropolitan Daniel, visited the monastery and served a moleben of thanksgiving in the church that is quickly taking shape, reports the monastery’s Facebook page.

Met. Daniel was concelebrated by Archimandrite Gerasim (Shevtsov), a monk of the Holy Trinity-St. Sergius Lavra who was sent in 2005 to help revive monastic life in Japan and now serves as the monastery’s abbot, Fr. Constantine Masuda, the Secretary of the Tokyo Diocese, and Protodeacon Elijah Takei.

All the clergy of the Tokyo Diocese also gathered in the church to pray at the service. Following the service, Archim. Gerasim informed the gathered clergy about the long-term plans for building the church, a pilgrims’ guest house, a library, a candle factory, and so on.

For his part, Met. Daniel noted the importance of the building plans but also reminded that a monk’s first and most important work is prayer. Therefore, Fr. Gerasim asked His Eminence to provide them with an anitmins so they could begin serving in the monastery chapel.