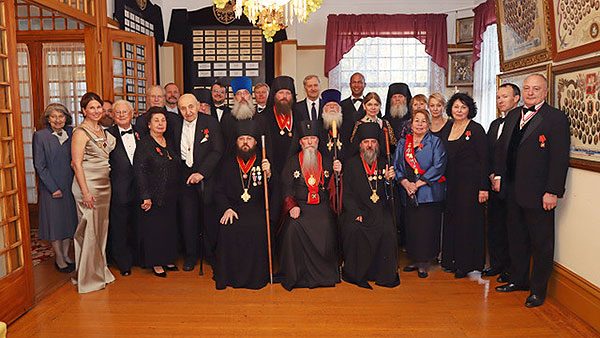 On Sunday, February 17, 2019, in accordance with tradition, a ceremonial gathering of the Cavaliers and Bearers of the Orders of the Russian Empire was held in memory of their patron saint, St Anna the Prophetess. Ladies and gentlemen from California, England and Russia attended divine services in Holy Resurrection Patronal Church in San Francisco, CA. Solemn Liturgy was celebrated by His Eminence Archbishop Kyrill of San Francisco and Western America of the Russian Orthodox Church Outside of Russia. He was joined by Abbot James (Corazza) Deputy Rector of the Old Cathedral of the Mother of God “Joy of All Who Sorrow,” and Archdeacon Peter (Karakozoff) of the new cathedral of the same name in San Francisco.

During the service, His Grace Bishop Irenei of Richmond and Western Europe and His Grace Bishop Theodosius of Seattle, Vicar of the Western American Diocese, prayed with the Cavaliers and worshipers for the Head of the Russian Imperial House, Grand Duchess Maria Vladimirovna and its Heir, Grand Duke Georgy Mikhailovich.

In his address to the worshipers, Bishop Irenei pointed out that the mission of the Order of St Anna is charity and help for the needy, and called upon the members to continue to faithfully serve the Grand Duchess and the society.

That evening, the Cavaliers were invited to a formal reception at the House of Russian Cadets and Veterans of World War I in San Francisco. The event began with a litiya for the members of the Russian Imperial House: Tsarevna Anna Petrovna (after her sudden death, her husband, Duke Karl Friedrich, established, in 1735, the Order of St Anna in her August memory), Grand Duke Konstantin Konstantinovich (a Cavalier of the Order of St Anna, known as “Father of All Cadets”) and all the reposed members of the Order. Afterwards, a short moleben service was sung to the Prophetess Anna with prayers for Their Imperial Highnesses and all the knights. Mitred Protopriest Stefan Pavlenko, Rector of the Church of All Russian Saints in Burlingame, CA, led the service.

Medals were then awarded: military doctor Colonel Vladimir Vasilievich Voropaev received the Medal of St Anna. He is the President of the “Health of the Fatherland” Foundation in Moscow. Over the course of many years, Dr Voropaev brings children from Russia for medical treatment in Los Angeles. The LV Golitzina Society for the Aid to Russian Children supports his work. Protopriest Paul Volmensky, long-time Rector of Holy Ascension Church in Sacramento, also received the medal for his many labors for strengthening Orthodoxy and Russian traditions among his parishioners. Doctor of Jurisprudence and entrepreneur Anastasy Emerson Watley was granted the Order of St Anna, 3rd degree, for his many years of quiet and unpaid assistance to Russian organizations and Orthodox Russians and Americans seeking counsel, and for his work in support of the Russian Imperial House. His wife, EV Olhovskaya, was given the Synodal Medal of Holy Grand Duchess Elizabeth (ROCOR) for her 25 years of work at the Western American Diocese. Archdeacon Peter was named Cavalier of St Stanislav, 2nd degree and the Medal of St Anna, 3rd degree, for his many labors to the benefit of the Russian Orthodox Church and the Imperial House. Larisa Carlson and Zhanna Gass of Los Angeles were awarded the Medal of St Anna by the Imperial House for their enormous contributions to the development of Russian culture among the Russian community and work with Russian youth. Ms Carlson is the Director of Katyusha Studio and the “face” of the Russian community in her city. Ms Gass is the long-time administrator of the parish school at Holy Transfiguration Cathedral (neither was able to be physically present at the ceremony). The Head of the Russian Imperial House personally honored each with a decree signed by the Grand Duchess.

During dinner, the members of the Society and representatives of Russian societies engaged in conversation in a warm atmosphere.