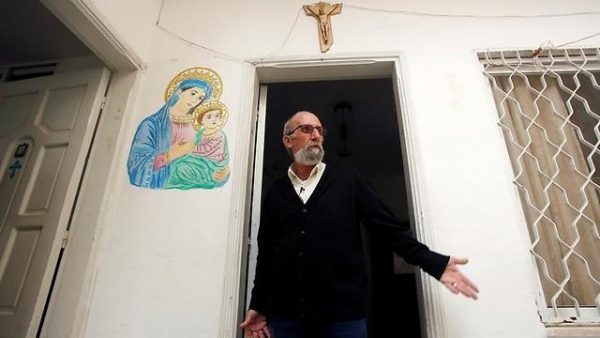 Naser Jelda at his home in Gaza (Photo: Reuters)

Only about 1,200 Christians remain in Gaza — a tiny fraction of the population in a territory run by Hamas Islamists — but artist Naser Jeldha is doing what he can to preserve its Christian heritage through art.

In his studio in the heart of old Gaza, not far from a 5th century Orthodox church, Jeldha spends his days carving religious figurines, chiseling low-relief carvings of Biblical scenes and painting portraits of Jesus, Mary Magdalene and the saints.

“My message is about my religion,” said the grey-bearded 57-year-old, a member of the Greek Orthodox community.

As he works, steel-rimmed spectacles perched on his nose, Jeldha listens to Byzantine prayer music that echoes softly around the studio, creating an atmosphere from another era.

The walls are covered in his pictures, with more laid out on the arms of chairs and sofas, and others propped on a 150-year-old Russian piano in the corner. As well as painting and sculpture, Jeldha plays the accordion, piano and guitar.

In the run up to Christmas – celebrated on Jan. 7 in the Orthodox church – Jeldha is busy making pieces as gifts for friends and relatives.

While he has been an artist for 35 years, he does not display his works or offer them for sale. Instead, he presents them as gifts at weddings or events on the Christian calendar. He does, however, have plans for a public showing soon.

In the next two weeks, he is also hoping he will be one of about 800 Christians granted a permit by Israel to leave Gaza and travel to Bethlehem, in the Israeli-occupied West Bank, to attend prayer services in Jesus’s birthplace.

“We have applied for permits and if we get them I intend to travel with my family,” said Jeldha, who is determined to remain in Gaza despite the departure of many Christians over the last decade in the face of rising economic hardship.

While Gaza’s Christians generally enjoy good relations with their Muslim neighbours, there have been isolated attacks by hardline Salafist groups on Christian tombs and symbols.

Hamas, the Islamist movement that has ruled Gaza since 2006, is keen to ensure the Christian community feels safe and protected. Its leaders occasionally visit the heads of the three Gaza churches to build stronger relations.

Jeldha acknowledged that the economy was suffering, with the blockade imposed by Israel and Egypt, a move to pressure Hamas, limiting trade, driving up costs and causing despair.

Despite that, Jeldha, whose white front door is adorned with a small cross painted in blue, said he would never leave.

“I have lived in this neighbourhood for 54 years. I have brotherly and wonderful relations with Muslims,” said the father of four. “Gaza is beautiful and I will not leave it…I do not feel I am a stranger here.”