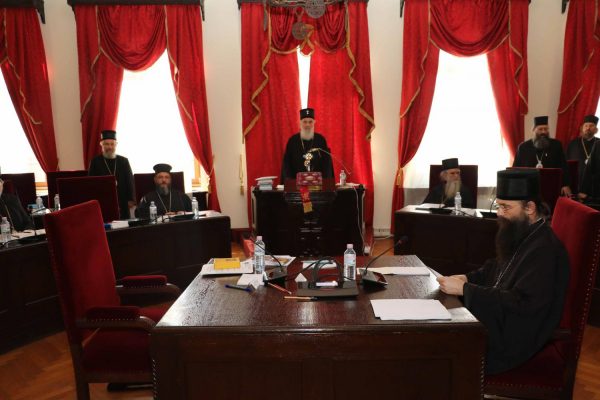 One of the major items on the agenda of the Assembly of Bishops of the Serbian Orthodox Church that completed its work on 18th May 2019, was the situation in Kosovo and Metohija, including the issue of the status of this province which has an immense historical and spiritual importance for the Serbian people.

In the statement issued on 23rd May, the participants in the Assembly noted, in particular: “While celebrating the 800th anniversary of the autocephaly of our Local Church, mindful of our great responsibility towards God, holy patriarchs, archbishops and bishops who for centuries together with their clergy, monastics and faithful people held on to the behest of the Holy Prince Lazar and preserved Kosovo and Metohija in the spiritual memory as our holy and cherished land, and fighting for the preservation of our holy sites and freedom of our people, the Holy Assembly of Bishops once again states its unanimous and unambiguous position which was also expressed at the Assembly’s sessions in May and November last year.”

As the participants in the Assembly emphasized, Kosovo and Metohija constitutes an integral part of the sovereign territory of the Republic of Serbia and as such is defined in the Constitution of Serbia and in the United Nations Security Council Resolution 1244. Despite the illegal proclamation of the so-called Kosovo state, the sovereignty and territorial integrity of Serbia, including Kosovo and Metohija, are recognized by the vast majority of people, including by Russia, China and five countries of the European Union, as well as the OSCE, UNESCO and other important international organizations. “Therefore, the Holy Assembly of Bishops of our Church considers any changes whatsoever in the status of Kosovo and Metohija inadmissible, leading to either its recognition as an independent state or to some other variant of territorial partition, without which delimitation is impossible,” the statement reads, “Such decisions would inevitably lead to the expulsion of the majority of the remaining Serbian people living in Kosovo and Metohija in the regions with prevailing Albanian population, as well as would cause immeasurable damage to our spiritual and cultural heritage.”

“As bishops of the Serbian Orthodox Church, we express this position not as a political one, but, first and foremost, as a responsible pastoral and historical one, stemming from our Church’s centuries-old struggle for the preservation of its holy sites, for the preservation of its flock at their hearths – the position stemming from the will of the vast majority of our people,” the participants in the Assembly of Bishops stated. As the Serbian hierarchs noted, it does not mean that they support the idea of the so-called “frozen conflict.” They called upon all the political leaders “to continue the dialogue without pressure and intimidation in the context of seeking solution to the issue of protecting the rights of the people and the freedom of life and activities of the Serbian Orthodox Church, as well as of providing institutional and actual protection to our holy sites and ensuring unimpeded return of the displaced and free access to the property for those from whom it was unlawfully taken or who saw it usurped.”

“Therefore, we fully support any responsible dialogue which is to facilitate the triumph of justice and law and reconciliation between the two peoples living in the territory of Kosovo and Metohija as a southern region of Serbia,” the statement also reads.