Statement of the Holy Assembly of Bishops on Kosovo and Metohia 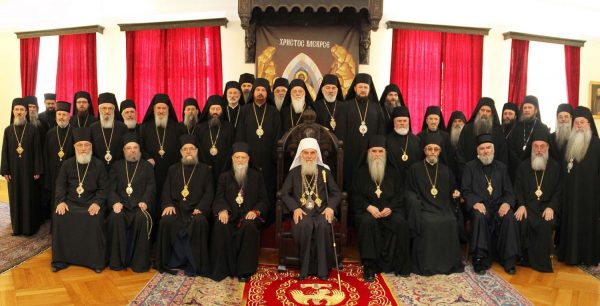 From its historical seat, the monastery of the  Patriarchate of Pec, which with its faithful people has  passed  a crucifixion-resurrection path of suffering and renewal, thirty-seven years after a setting fire to a refectory of the Patriarchate of Pec, twenty-one years since the martyr’s death of Hieromonk Stephan, spiritual father of this sacred convent, – the Holy Assembly of  Bishops,  presided over by His Holiness the Serbian Patriarch Irinej, following visitations to our holy shrines – Patriarchate of Pec, monasteries of  Decani and Zociste,  and after conversations with the competent diocesan  Bishop, diocesan  clergy, monastics and faithful people in Pec, Prizren and Velika Hoca, issues  the flowing statement concerning the current situation on Kosovo and Metohija.

The Serbian Orthodox Church, as the guardian of historical, spiritual and cultural identity of our people, is called upon to address the most urgent situation in Kosovo and Metohija at this year’s session of the Holy Assembly of Bishops and to express extraordinary concern of the clergy, monastics and faithful people because of frequent official and unofficial statements regarding the final status of our southern province. The Assembly of Bishops shares their concern because of frequent statements made by powerful countries in the West that openly talk about the independence of Kosovo and Metohija, as well as due to the different speculations about a possible division of the southern Serbian province. In particular, various forms of pressure from Kosovo institutions, disrespect of laws and elementary human rights as well as more and more frequent usurpation of Church and private properties, have particularly contributed to this.

Having all this in mind, the Holy Assembly of Bishops of the Serbian Orthodox Church is going to deal with this matter thoroughly at this year’s session and, thereafter, will issue an official statement.