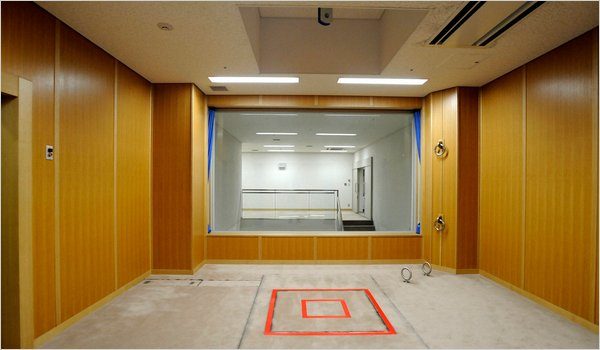 The trap door is outlined in red in an execution chamber at the Tokyo Detention Center. Credit Kyodo/Reuters

While the execution of AUM Shinrikyo cult founder Shoko Asahara and the group’s former senior members may have drawn the curtain on a string of crimes that shocked Japan, it opens the door for society to engage in further debate about the death penalty.

At a time when the global trend is toward abolishing capital punishment, Japan’s death penalty system has sparked international criticism, especially over the secrecy surrounding its executions, and prompted critics to push for its abolition.

Yuji Ogawara, who heads a lawyers’ group against the death penalty at the Japan Federation of Bar Associations, said the executions do not bring closure to AUM’s crimes.

“We should have heard more stories from the people involved and deepened discussions in society to get to the bottom as to why such crimes related to religion happened,” Ogawara said.

As time passes, public memories of the crime may fade away. Victims, families and their supporters, as well as those involved in the legal system believe it is necessary to come to terms with the crimes and draw lessons from them to avoid a similar incident happening again.