Bearing the Fruits of the Spirit: On Great Monday

Patriarch Kirill of Moscow and All Russia | 09 April 2012

Each day of Passion Week is marked by special commemorations. After His triumphant entry into Jerusalem, the Lord went every evening with His disciples to the Mount of Olives after spending the day in the Holy City. During these days He turned to them with words that are especially powerful and filled with profound meaning, words that reveal the mysteries of the Kingdom of God and open the curtain to the future of the entire human race.

Monday is associated with particular events. Along the way to Jerusalem, the Lord and His disciples saw a fig tree covered with rich foliage. When the famished travelers approached the tree, the Lord began to look for fruit but did not find a single one. He then cursed the fig tree.

It is well known how critics of the Gospel – people who for various reasons could not and cannot accept the word given to the human race by the Lord Jesus Christ – have criticized this passage. St. Innocent of Kherson responds to this criticism in remarkable manner. According to his words, it was not, of course, as if the Lord was offended by the fig tree and said: “I wanted to taste of the fruit, but there was none – so may you be cursed.” This is not at all what the Savior wanted to say; rather, He cursed the fig tree to give us an example of how barrenness is punishable. 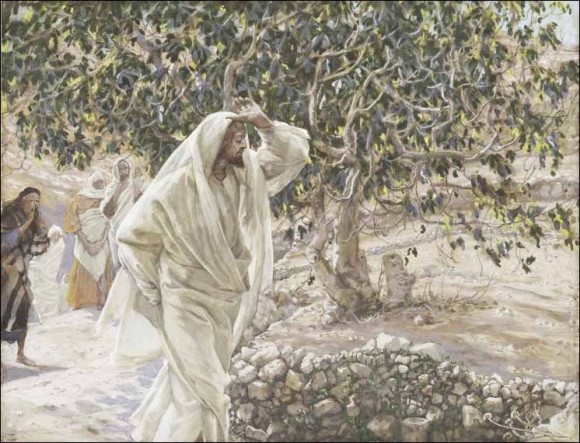 It is no accident that on the same day He told the parable of the wicked husbandmen – those who did not want to give the fruit of the vineyard to their master, beat the messengers sent to them and, finally, killed his son. This story refers most immediately to the Jewish people, who at that time had ceased to bear fruit in their religious life, which is why the Lord came: so that both this people and all peoples of the earth might become capable of bearing fruit. The parable of the husbandmen helps us to understand the meaning of the condemnation of the fig tree. The Lord is condemning barrenness: when one does not bear fruit, when one’s whole life passes by without fruit.

Each person has his own fruit. One fruit is visible only to one’s intimates and family. There are also fruits that are enjoyed by many: the greatest inventions, creative insights, and remarkable works of art. There are also remarkable talents that God gives to some so that they might direct other people – then the fruit becomes the common action of many, aimed at the betterment of life. But the Lord, in condemning both the fig tree and the husbandmen, had in mind primarily other fruits, namely those of the spirit. Each of us should bear fruit that grows ripe in the depths of the human soul; and if we appear at the Dread Judgment without these fruits, we will be condemned and cursed just as the barren fig tree was.

Perhaps these frightful words, which the Lord addressed to the tree and which have served for the edification of many, will also help us to understand, at the beginning of Passion Week, that without fruits of the spirit there can be neither life nor eternal life. We know what these fruits are. The Apostle Paul also teaches us about them; and the Church’s preaching instills in us from day to day what the fruits of the spirit are. Passion Week is given to us so that, having passed through the arena of the Holy Forty Day Fast without perhaps having managed to accomplish some thing, we might penetrate the meaning of everything that God has accomplished in Christ for our salvation, prompting us to bear fruit to the Lord: the fruit of our lives, by which we will be justified at the Dread Judgment of God. Amen.

Excerpted from a sermon given at the St. Sergius Cathedral, Vysokopetrovsky Monastery, Moscow, on April 18, 2011.