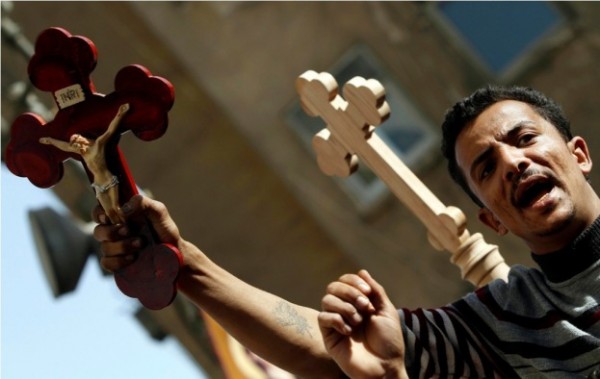 The Christians [in Lebanon] and their leaders continue to demand their disregarded rights. Insofar as they are demanding what they call “the rights of Christians”, then their rights as Christians must necessarily be the same as the rights of the one to whom they belong– that is, Christ. But what a difference there is between these two things! If their rights were in accord with His rights, then they would be demanding a just state that does not discriminate between citizens on a sectarian basis. Christ worked– indeed, was the first to work– to bring into contempt the narrow national-religious affiliation of His people, the Jews. He tried to bring them out of their isolation and pride over other peoples and they killed Him and did not allow themselves to be corrected. Is not the Christians’ demanding the rights of their religious community not a sort of return to that racist and discriminatory Judaism? Is not this demand a sort of revenge, two thousand years later, against Christ and His revolution?

If Christians’ rights were the same as Christ’s rights, then they would demand a just state in which the bases of social solidarity exist to provide bread, electricity, water, fuel and material needs for all poor and needy people, as well as free education, health insurance and old-age pensions for all, and equality between all Lebanese where this equality is lacking between members of different communities and between men and women– in the granting for citizenship, for example– but also between Lebanese and non-Lebanese, especially the refugees who have found in Lebanon an oasis of security that shelters them from the wars and occupations that have brought death and destruction in their own countries. I might add, finally, the right to live in a clean environment, free from garbage…

If Christians’ rights were the same as Christ’s rights, then they would be the same as the rights of Muslims, Jews, Sabians, Yezidis… those without religious affiliation, atheists and every single citizen. Are not His rights, as He said in His Good News, the rights of the poor, the wretched, the meek, the sorrowing, the hungry, those who thirst for righteousness, the merciful, the poor of heart, those who strive for peace and the persecuted? Do we not find each of these among all members of the human race, no matter what their affiliations may be?

The concern of the Christians and their leaders, both political and non-political, has come to be elsewhere. Their concern has come to be providing opportunities to improve the rights of Christians in the authority for which Christ only had contempt. Did not Christ, the “king entering Jerusalem” not mock kings when He rode a donkey while the symbol of royalty is riding horses? Did He not declare to His disciples, “The kings of the Gentiles exercise lordship over them, and those who exercise authority over them are called ‘benefactors.’ But not so amongyou; on the contrary, he who is greatest among you, let him be as the younger, and he who governs as he who serves” (Luke 22: 25-26)?

The “Christians’ rights” have come to have no connection to Christ. The hope of Christians has come to be elsewhere. Christ is no longer their king. Did not those who supported crucifying Christ cry out before Pilate, who had pity for Him, “We have no king but Caesar”? Yes, the crowds preferred the emperor of Rome to Him. They preferred tyranny in order to get rid of Him. For them, Christ constituted a danger to mankind greater than tyranny because He called for abandoning slavery to worldly things and all their trappings. He called for accepting the cross, love, and sacrifice and for hating money and authority. Between Christ and Caesar, they chose Caesar.

If Christians wanted to demand their rights, then they must either demand the Christ’s rights, their Lord and Master, the rights mentioned in the Gospel, and thus be faithful to their belonging to this Redeeming God or, if they want to continue with their political demands by which they obtain leadership positions and important offices in the state, then we will ask them: is Christ pleased that they are demanding what they are demanding in His name, disregarding what He called for? Of course not! What a difference there is between Christ’s rights and Christians’ rights!