The Living Temple of God 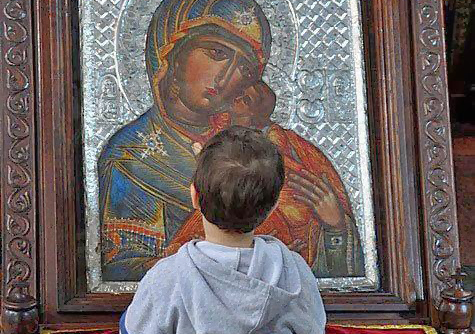 The Church often refers the Mary as the Living Temple of God because, like the temple of the Old Testament, her womb was the place where the Glory of the Lord dwelt. However, unlike the temple—made of inanimate stones and wood and covered in gold—Mary is the Living Temple of God. Although she has experienced death, she is still the Living Temple because, as Christ said, “all who live and believe in me shall never die.” Mary lives as Queen of heaven standing at the right hand of Her Son and Lord (c.f. Psalm 44: 10-18) together with all of her “virgin companions,” those who in imitation of Her have believed in Him and by the Holy Spirit have Christ dwelling in their hearts.

Some of what it means for Mary to be the Living Temple of God is lost on us today because we do not understand how believers under the Old Covenant related to the temple. Those who know anything at all about the temple know about its liturgical and ultimately symbolic function foreshadowing heavenly realities finally manifested in Christ. However, most do not realize that the temple was an icon of the presence of God and played an important part in the prayer life of the faithful. King Solomon’s prayer of dedication found in II Chronicles 6:14-42 gives us some insight into the prayer life of believers under the Old Covenant and the iconic role the temple played in it.

At the beginning of the prayer Solomon makes it clear that God is not literally in the temple any more or less than God is or isn’t anywhere else, for “heaven and the heaven of heavens cannot contain You.” “Yet,” Solomon asks, “regard the prayer of your servant…so [that] day and night Your eyes may be open toward this house…that you may hear the prayer Your servant prays toward this place.” That is, Solomon asks God to regard the temple as an icon toward (or to) which one would pray. In praying toward the temple, one is praying to God.

Unfortunately, the Orthodox Study Bible translation of the Septuagint translates as “in” all of the prepositions in this passage which the King James translates as “toward.” This is a mistake. Pray “toward” or “in the direction of” is the correct translation in vv. 20,26,29,32,34, 38 (See grammatical explanation below).

The faithful under the Old Covenant should pray toward the temple as an icon of God’s presence, even if they were exiles in a foreign land (v.38). Although God is not limited by the temple—and Solomon acknowledges this at the beginning of his prayer—the temple functions as a special place toward which or in the direction of which prayer should be offered because God put His Name there (v.20). The temple had an intercessory function because its existence manifested the fulfillment of God’s promise to His people and God’s presence with His people. It was only in the temple (or the tabernacle before it) that acceptable worship could be offered to God. Only in the temple could atoning sacrifice be offered or sacrifices of thanksgiving made. Only toward the temple could the faithful Israelites pray with confidence knowing that their prayer would be heard, especially if they had sinned and were suffering judgment because of their sin.

In a similar manner, the faithful followers of Christ have come to regard Mary as the Living Temple of God. You might say that Christians often pray to God toward Her. Mary is the Intercessor, the Mother of God, the Proto-Christian, the One who bore God in her womb and has thereby gained the intimacy and privilege of a mother with Her Son and our God. When we pray to the Mother of God, we are not praying to her instead of God (as we are sometimes accused). We are praying to God through Her, or to use the Old Testament temple image, we are praying to God toward Her. As the Living Temple of God, Mary not only intercedes (because she is living, unlike the temple made of stone), but she also is intercession. That is, she is the human being from whom and in whom God took on humanity for the salvation of the human race. Mary’s womb is the Gate of the Temple through which “the Lord God of Israel” enters (see Ezekiel 44:1-3); and as such, just as the temple in Jerusalem was itself intercession for the faithful of Israel, so Mary is intercession for the faithful in Christ.

This is why it is right—perhaps even incumbent on us—to pray to Mary; or, as it is commonly put to avoid unnecessary misunderstanding: to ask Mary to pray for us. This is a convenient phrase to avoid conflict with Muslims and Protestants, but anyone who knows English fairly well realizes that it is just a word game: “pray” and “ask” are often synonyms. But for those of us in the family of God and in the Tradition of the Church of both the Old and New Covenants, such phrases are not necessary: prayer toward the Temple is prayer to God.

[Grammatical explanation] Two Hebrew words are used in this passage to mean “toward.” In some cases it is the Hebrew word ̕êl “denoting motion or direction towards (whether physical or mental)” (translated eis in Greek). While “in” is one of many possible translations of eis, “to” and “toward” are also possible. Here I think the Hebrew should influence the translator of the Septuagint. The NETS translation of the Septuagint follows this tack in translating eis as “toward” in this passage. In the other cases, the Hebrew word derek is used. Derek means most literally “way” or “road,” but is also used to mean “in the direction of” or “toward.” Here two Greek words are used to translate the Hebrew: the preposition kata and the noun òdós (road or way). For these words the OSB translation uses “in” (v.34—clearly wrong) and “toward” (v.38—acceptable), but I think the NETS has it better translating both “in the direction of.”