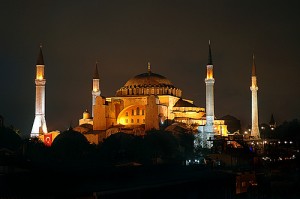 While unrest in Turkey continues to capture attention, more subtle and more telling events concerning the Islamification of Turkey—and not just at the hands of Prime Minister Erdogan but majorities of Turks—are quietly transpiring.  These include the fact that Turkey’s Hagia Sophia museum is on its way to becoming a mosque.

Why does the fate of an old building matter?

Because Hagia Sophia—Greek for “Holy Wisdom”—was for some thousand years Christianity’s greatest cathedral. Built in 537 in Constantinople, the heart of the Christian empire, it was also a stalwart symbol of defiance against an ever encroaching Islam from the east.

After parrying centuries of jihadi thrusts, Constantinople was finally sacked by Ottoman Turks in 1453. Its crosses desecrated and icons defaced, Hagia Sophia—as well as thousands of other churches—was immediately converted into a mosque, the tall minarets of Islam surrounding it in triumph.

Then, after the dissolution of the Ottoman Empire, as part of several reforms, secularist Ataturk transformed Hagia Sophia into a “neutral” museum in 1934—a gesture of goodwill to a then triumphant West from a then crestfallen Turkey.

Thus the fate of this ancient building is full of portents. And according to Hurriyet Daily News, “A parliamentary commission is considering an application by citizens to turn the Hagia Sophia in Istanbul into a mosque….  A survey conducted with 401 people was attached to the application, in which more than 97 percent of interviewees requested the transformation of the ancient building into a mosque and afterwards for it to be reopened for Muslim worship.”

Even lesser known is the fact that other historic churches are currently being transformed into mosques, such as  a 13th century church building—portentously also named Hagia Sophia—in Trabzon. After the Islamic conquest, it was turned into a mosque.  But because of its “great historical and cultural significance” for Christians, it too, during Turkey’s secular age, was turned into a museum and its frescoes restored. Yet local authorities recently decreed that its Christian frescoes would again be covered and the church/museum turned into a mosque.

Similarly, the 5th century Studios Monastery, dedicated to St. John the Baptist, is set to become an active mosque.  And the existence of the oldest functioning Christian monastery in the world, 5th century Mor Gabriel Monastery is at risk. Inhabited today by only a few dozen Christians dedicated to learning the monastery’s teachings, the ancient Aramaic language spoken by Jesus and the Orthodox Syriac tradition, neighboring Muslims filed a lawsuit accusing the monks of practicing “anti-Turkish activities” and of illegally occupying land which belongs to Muslim villagers. The highest appeals court in Ankara ruled in favor of the Muslim villagers, saying the land that had been part of the monastery for 1,600 years is not its property, absurdly claiming that the monastery was built over the ruins of a mosque—even though Muhammad was born 170 years after the monastery was built.

Turkey’s Christian minority, including the Orthodox Patriarch, are naturally protesting this renewed Islamic onslaught against what remains of their cultural heritage—to deaf ears.

The Muslim populace’s role in transforming once Christian sites into mosques is a reminder of all those other Turks not protesting the Islamization of Turkey, and who if anything consider Erdogan’s government too “secular.”

Their numbers are telling.  In May 2012, Reuters reported that

Thousands of devout Muslims prayed outside Turkey’s historic Hagia Sophia museum on Saturday [May 23] to protest a 1934 law that bars religious services at the former church and mosque. Worshippers shouted, “Break the chains, let Hagia Sophia Mosque open,” and “God is great” [the notorious “Allahu Akbar”] before kneeling in prayer as tourists looked on. Turkey’s secular laws prevent Muslims and Christians from formal worship within the 6th-century monument, the world’s greatest cathedral for almost a millennium before invading Ottomans converted it into a mosque in the 15th century.

Calls to turn Hagia Sophia into a mosque is not about Muslims wanting a place to pray—as of 2010, there were 3,000 active mosques in Istanbul alone.   Rather, it’s about their reveling, and trying to revivify, the glory days of Islamic jihad and conquest: Reuters added that Muslims “staged the prayers ahead of celebrations next week marking the 559th anniversary of the Ottoman Sultan Mehmet’s conquest of Byzantine Constantinople.” According to Salih Turhan, a spokesman quoted by Reuters, “As the grandchildren of Mehmet the Conqueror, seeking the re-opening Hagia Sophia as a mosque is our legitimate right.”

Sultan Mehmet was the scourge of European Christendom, whose Islamic hordes seized and ravished Constantinople, forcibly turning it Islamic. Openly idolizing him, as many Turks do, is tantamount to their saying “We are proud of our ancestors who killed and stole the lands of European Christians.” And yet, despite such militant overtones, Turhan, whose position is echoed by many Turks, still manages to blame the West: “Keeping Hagia Sophia Mosque closed is an insult to our mostly Muslim population of 75 million. It symbolizes our ill-treatment by the West.”

So keeping a historically Christian/Western building—that was stolen by Islamic jihad—as a neutral museum is seen as “ill-treatment by the West,” even as Turks continue destroying the nation’s original Christian heritage.

And the historical revisions continue.  Last May 29th, when Turks celebrate the Fall of Constantinople, Erdogan himself declared that the jihadi invasion—which saw countless Christians enslaved, raped, or slaughtered—was the true “time of enlightenment.”  After showing how Erdogan got it upside down, Ralph Sidway, an Orthodox Christian author,  wrote:

Erdogan and Turkey celebrate the Fall of Constantinople, and the West congratulates them.  “We are continuing to write history today,” says Erdogan, and write it — or re-write it — they do, under the somnambulant gaze of craven Western leaders too ignorant, or too fearful, to challenge Islam’s claim to moral superiority, historical righteousness and eventual world domination. By their policies, posture and pronouncements, Western European nations, and the United States, are conceding the future to a rapidly re-Islamicizing Turkey, and are aiding in Islam’s stated goal of a new, global caliphate determined to conquer us, just as it conquered Constantinople 560 years ago.  Every Turkish celebration of 29 May 1453 is a gauntlet flung down in challenge to the West. Each such event which goes unanswered and unchallenged by the West is another nail in the coffin of Christian culture, human rights, and free people everywhere.

Indeed, at a time when Turkey is openly reclaiming its jihadi heritage, Europeans are actively erasing their Christian heritage which for centuries kept the Islamic jihad at bay.  Among other capitulations, Europeans are currently betraying church buildings to Muslims to convert to mosques and scrubbing references of the historic Turkish jihads against Europe from classroom textbooks, lest Muslim students be offended.

Meanwhile, here are neighboring Turkey’s Muslims openly praising the same jihadi warlords who brutally conquered a portion of Europe centuries ago, converting thousands of churches into mosques, even as they openly prepare to finish the job—which may not even require force, as Europe actively sells its own soul.