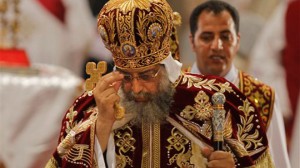 Pope Tawadros II, the 118th pope of the Coptic Church of Egypt, leads the Easter Mass at St. Mark’s Cathedral in Cairo, Egypt

We are reliving the true history of how the Islamic world, much of which prior to the Islamic conquests was almost entirely Christian, came into being.

recently said: “The flight of Christians out of the region is unprecedented and it’s increasing year by year.”  In our lifetime alone “Christians might disappear altogether from Iraq, Afghanistan, and Egypt.”

Ongoing reports from the Islamic world certainly support this conclusion:  Iraq was the earliest indicator of the fate awaiting Christians once Islamic forces are liberated from the grip of dictators.

In 2003, Iraq’s Christian population was at least one million. Today fewer than 400,000 remain the result of an anti-Christian campaign that began with the U.S. occupation of Iraq, when countless Christian churches were bombed and countless Christians killed, including by crucifixion and beheading.

The 2010 Baghdad church attack, which saw nearly 60 Christian worshippers slaughtered, is the tip of a decade-long iceberg.

Now, as the U.S. supports the jihad on Syria’s secular president Assad, the same pattern has come to Syria: entire regions and towns where Christians lived for centuries before Islam came into being have now been emptied, as the opposition targets Christians for kidnapping, plundering, and beheadings, all in compliance with mosque calls telling the populace that it’s a “sacred duty” to drive Christians away.

In October 2012 the last Christian in the city of Homs—which had a Christian population of some 80,000 before jihadis came—was murdered.  One teenage Syrian girl said: “We left because they were trying to kill us… because we were Christians….  Those who were our neighbors turned against us. At the end, when we ran away, we went through balconies. We did not even dare go out on the street in front of our house.”

In Egypt, some 100,000 Christian Copts have fled their homeland soon after the “Arab Spring.”  In September 2012, the Sinai’s small Christian community was attacked and evicted by Al Qaeda linked Muslims, Reuters reported. But even before that, the Coptic Orthodox Church lamented the “repeated incidents of displacement of Copts from their homes, whether by force or threat.

Iraq, Syria, and Egypt are part of the Arab world.  But even in “black” African and “white” European nations with Muslim majorities, Christians are fleeing.

In Mali, after a 2012 Islamic coup, as many as 200,000 Christians fled.  According to reports, “the church in Mali faces being eradicated,” especially in the north “where rebels want to establish an independent Islamist state and drive Christians out… there have been house to house searches for Christians who might be in hiding, churches and other Christian property have been looted or destroyed, and people tortured into revealing any Christian relatives.” At least one pastor was beheaded.

Even in European Bosnia, Christians are leaving en mass “amid mounting discrimination and Islamization.”  Only 440,000 Catholics remain in the Balkan nation, half the prewar figure.

Problems cited are typical:  “while dozens of mosques were built in the Bosnian capital Sarajevo, no building permissions [permits] were given for Christian churches.” “Time is running out as there is a worrisome rise in radicalism,” said one authority, who further added that the people of Bosnia-Herzegovina were “persecuted for centuries” after European powers “failed to support them in their struggle against the Ottoman Empire.”

And so history repeats itself.

One can go on and on:

To anyone following the plight of Christians under Islamic persecution, none of this is surprising.  As I document in my new book, “Crucified Again: Exposing Islam’s New War on Christians,” all around the Islamic world—in nations that do not share the same race, language, culture, or economics, in nations that share only Islam—Christians are being persecuted into extinction. Such is the true face of extremist Islamic resurgence.