Arabic language websites reported earlier this week that the al-Qaeda-linked Islamic State of Iraq and the Levant—which, throughout the course of the war against the Syrian Bashar al-Assad government has committed any number of atrocities, from decapitating “infidels” to burning churches—has successfully “forced” two Armenian Christian families to convert to Islam.

A video accompanies some of these reports. In it, what appears to be an elderly Armenian man stands alongside an Islamic cleric who announces the Christian man’s conversion to Islam—to thunderous cries of “Allahu Akbar!” In his exultation, the cleric makes exuberant statements like “You see, we have no honor without Islam—without proclaiming aloud that ‘There is no god but Allah and Muhammad is his prophet!’” (Without the religious jargon, this is simply another way of saying, “Only by joining our team can you ever escape dishonor,” the lot of all non-Muslim, subhuman “infidels.”)

The cleric also adds that, because the man is the head of his household, his Christian wife and children are all now Muslim as well—“all praise to Allah!” Naturally, if they reject their new Islamic identity, they become “apostates,” a crime punishable by death.

The rather flippant and sarcastic text that accompanies this video points out the obvious:

After decades of peaceful coexistence between the various religions of Syria, and after decades of living under the moderate form of Levantine Islam … these two Armenian families were none too keen on entering Islam or learning of its eminence—except at the hands of DAASH [al-Qaeda-linked Islamic State of Iraq and the Levant], which has been presenting a “rosy” picture of Islam and Muslims, by way of chopping heads, whipping people, and general repression.  Thus did these two Christian Armenian families finally enter Islam, “willingly”—but only at the hands of DAASH. 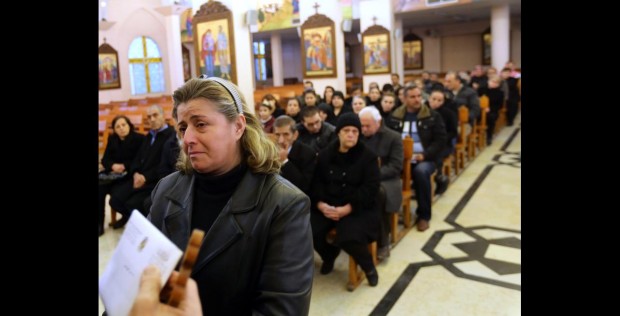 Syrian people from the Christian town of Maalula, a symbol of the ancient Christian presence in Syria which is currently under control of Syrian rebels, including jihadist groups, attend a mass service at the Saint Joseph church on December 18, 2013 in Damascus. Syrian Melkite Greek Catholic Patriarch Gregory III Laham, has called on his fellow Christians to stay in Syria, despite the brutal conflict raging in the country. According to the patriarch, 450,000 Syrian Christians have been displaced by the conflict that began in March 2011, around 40,000 of whom have fled to Lebanon. AFP PHOTO/LOUAI BESHARA

In other words, it’s “curious,” to say the least, that Christians who for generations lived amid moderate Muslim majorities in Syria but opted to remain Christian, are now “suddenly” attracted to Islam—and at the hands of a jihadi organization that has been bombing churches, kidnapping and beheading Christians, and even teaching children to slaughter Christians wherever they may be found.

Sound like genuine conviction to you? Maybe things like the 2012 news that “a family of Armenian Christians was found murdered, and all members of the family horribly decapitated” in Syria is compelling these Armenian families into seeing the “wisdom” of embracing Islam?

Here we reach an important but overlooked historical point: While many Christians, past and present, have indeed willingly embraced martyrdom—the sword, death—rather than recant Christ for Muhammad, the majority of born Christians, when faced with converting to Islam or dying, have opted for the former.  Indeed, call it a lack of idealism or a lack of faithfulness, when faced with converting to the “winning team” of Islam or simply being third-class subjects (dhimmis), many nominal Christians throughout the centuries have opted to convert.

That is precisely how and why the so-called “Islamic world”—the majority of which was almost entirely Christian before the Islamic conquests—came into being: a fact Western people were once well acquainted with, before the current age of political correctness and alternate realities fell upon us.

New information has just emerged concerning the recent killing of a young Armenian man, Minas, for refusing to convert to Islam, again at the hands of the Islamic State in Iraq and the Levant (so much for their claims that they do not threaten Christians to convert).

He was reportedly killed in one of ISIL’s dungeons in Aleppo, north Syria, which has a notable Armenian minority.

According to iNews, “Minas and his father were held in ISIL’s prison for 115 days, according to one activist, and his accusation was that he refused to submit [to Islam, i.e., convert].”

iNews adds that activists from the region sent the accompanying picture, saying it is of the slain Minas.  Others confirm that the picture is of a slain Armenian in Syria, but not of Minas.  In any case, the man appears to be wearing the garments of the Armenian Evangelical Church of Aleppo.

The same report mentions other Christian Armenians slaughtered, including one who reportedly had “his head chopped off and placed in a biscuit box.”

TheBlaze contributor channel supports an open discourse on a range of views. The opinions expressed in this channel are solely those of each individual author.