Source: The Christian Post
Stoyan Zaimov | 23 February 2017
A Coptic Christian man was shot in the head while his son was burned alive in El-Arish, North Sinai, just days after Islamic State-affiliates called believers their "favorite prey." 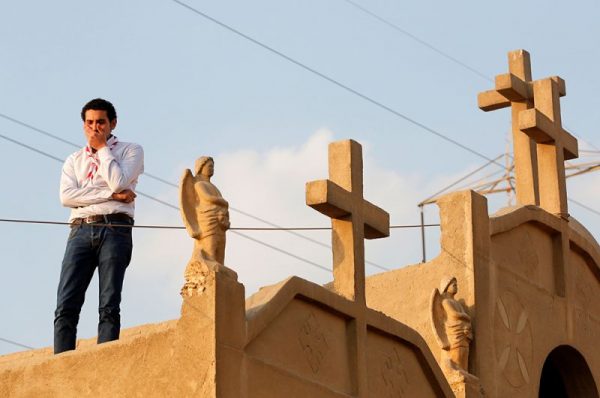 A man cries during the funeral of victims killed in the bombing of Cairo's Coptic cathedral, at the Mokattam Cemetery in Cairo, Egypt, December 12, 2016. Photo: REUTERS/AMR ABDALLAH DALSH

Al-Ahram reports that the father, 65-year-old Saad Hana, and his son, 45-year-old Medhat, were found by Egyptian security officials on Wednesday.

Authorities told The Associated Press that the father was shot in the head, while the son appeared to have been abducted and burned alive.

While no group has yet claimed responsibility for the killings, the attack comes after a wave of violence against Christians in North Sinai, and after specific warnings by IS affiliates in Egypt that more Christians will be targeted.

The Wilayat Sinai group said in a video this week that Christians are its “favorite prey,” and celebrated the suicide bombing of a Coptic church in Cairo in December that killed nearly 30 people.

“Oh worshipers of the cross … the soldiers of the state are watching you,” a militant says in the 20-minute long video.

“God gave orders to kill every infidel,” says another jihadist, referring to Christians and all who do not follow IS’ extremist teachings.

Fr. Youssef Sobhy, a priest at the Mar Girgis Coptic Orthodox Church in El-Arish, provided further insight into the latest attack on Wednesday, and said that three masked men assaulted the father and son at their home.

“The men knocked at the door of the home of the Christians and Medhat opened the door,” Fr. Sobhy told International Christian Concern, a persecution watchdog group. “The men shot his old father, Saad Hanna, in the head and then they burned the home.”

In another attack on Jan. 30, Coptic Christian trader Wael Youssed Meland was shot and killed by masked men in his grocery shop in El-Arish, while on Feb. 12, a Coptic veterinarian named Bahgat William Zkhar was shot in his car just south of the city.

Two other Coptic Christians, Adel Shawky and Gamal Tawfiq Gares, were also shot and killed by masked assailants this month.

“Many [have] left and fled while those who find it difficult to leave have sent their children away to relative[s] out[side] of Arish,” one Christian resident of El-Arish told ICC. “My family and I want to leave, but we cannot do that because our livelihoods are here, our homes are here, and we have nowhere else to go.”

“Christians cannot continue to live under such paralyzing conditions. The authorities must do more to protect vulnerable populations, particularly Christians, as they are being specifically targeted by militants,” Stark said.

“ICC calls on [President Abdel Fattah] el-Sisi’s administration to follow through on their promises to defend the Christian population of Egypt.”